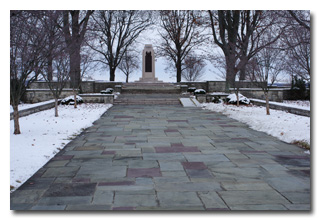 Upon arriving at the Interpretive Center, Eric stamped his Passport 2016 and spoke with the ranger who readily gave permission to perform the operation at the park gate at the intersection of the park and the North Country National Scenic Trail. 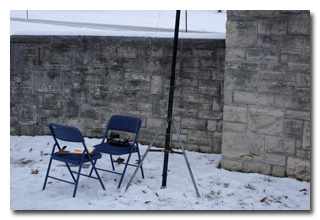 At the gate, Eric phoned the Wright-Patterson AFB security forces to alert them of his activity and then set up his station, in the snow, in the wind-break provided by the stone wall. Eric was on the air by 1859 UTC.

Eric began operations on 20m and his first QSO there came immedidately at 1859 UTC with KA7T. QSOs came steadily on 40m with his 13th and final QSO coming at 1924 UTC with K7RR. Eric would have operated longer but his fingers were painfully cold and he called it quits after his 13th QSO. All Eric's QSOs were made at the 5-watt level.

Eric recorded a temperature of 17°F—which was really too cold to be sitting outside, operating QRP CW, even with long-johns, a scarf, over-the-ear hat, insulated boots, and two layers of gloves with chemical hand-warmers.