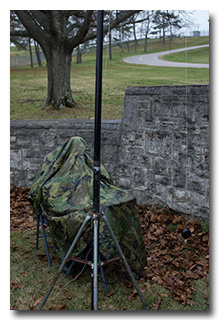 Upon arriving at the Interpretive Center, Eric stamped his Passport 2016 and he and Tom spoke with the ranger who readily gave the trio permission to perform the operation at the park gate at the intersection of the park and the North Country National Scenic Trail.

At the gate, Eric phoned the Wright-Patterson AFB security forces to alert them of the activities and then set up his station in the wind-break provided by the stone wall and operated under a military poncho to protect his KX3 and paper log-sheets. Tom chose to operate under a nice tree and used his body to protect his KX2 and log-sheets. Eric and Tom were on the air by 2000 UTC. 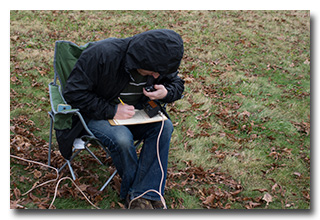 For Eric, a highlight of the operation was the park-to-park QSO with AE5X who was activating Amistad National Recreation Area (RC01).

Miles didn't operate but helped with set-up and tear-down and did all of the activation photography.