Upon arriving at the Interpretive Center, Eric stamped his Passport 2016 and he and Tom spoke with the ranger who readily gave the trio permission to perform the operation at the park gate at the intersection of the park and the North Country National Scenic Trail.

At the gate, before Eric could phone Wright-Patterson AFB security forces to alert them of the activities, the trio was visited by an officer who wasn't at all concerned. Eric chose to set up his station in the wind-break provided by the stone wall. Tom chose to operate under a nice tree. Eric and Tom were on the air by 1822 UTC.

Tom operated only SSB on 40m and very quickly managed to make 32 QSOs. Eric operated only on 20m and his first QSO there came at 1824 UTC with W4RQ. His 13th QSO came at 1840 UTC with N6KZ. All Eric's QSOs were made at the 5-watt level. Both Eric and Tom would have been willing to operate much longer but the extreme cold (25°F) and the requirement to operate outside the vehicle because of the National Scenic Trail prevented them from doing so.

Miles didn't operate but helped with set-up and tear-down and did most of the activation photography. 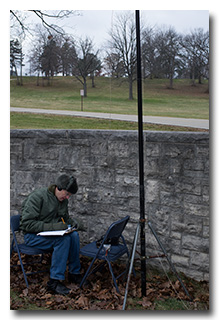 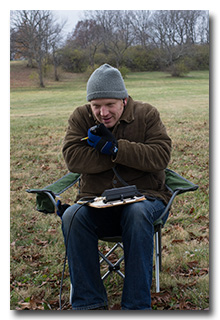