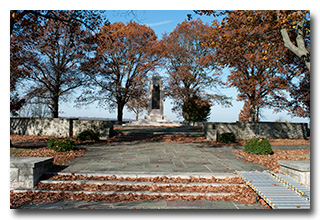 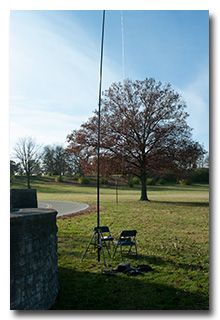 At the gate, Eric phoned Wright-Patterson AFB security forces to alert them of his activities and then quickly deployed his antenna and radio close to the stone wall. Eric was on the air by 1918 UTC.

Because it was CQ World Wide CW weekend, Eric started operations on 30m but QSOs came very slowly. His first QSO came at 1931 UTC with WK2S after some twelve minutes of calling "CW". Eric made two more QSOs on 30m, with the final one coming at 1933 UTC with W1VT. Eric switched to 40m and called "CQ" for about ten minutes before making his first QSO on 40m at 1942 with NJ3K. QSOs on 40m came so slowly that Eric became concerned he wouldn't make his required ten QSOs. Fortunately, the band suddenly opened at about 2007 UTC and Eric's 12th QSO came at 2010 UTC with NV4G. It appears the bands had been wiped out by a short-duration radio blackout. All QSOs were made at the 5-watt level.

Eric recorded at temperature of 49°F at his key during this operation.