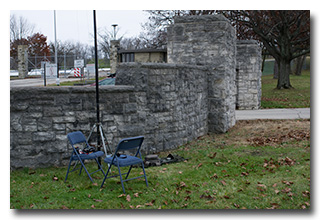 At the gate, Eric phoned Wright-Patterson AFB security forces to alert them of his activities and then quickly deployed his antenna and radio close to the stone wall. Eric was on the air by 1600 UTC.

Eric recorded at temperature of 42°F at his key during this operation.

A highlight of the operation was having an eye-ball QSO with Hank Greeb, N8XX, who arrived at the site for an activation just before Eric was to begin tearing down his station. Hank, who hails from Michigan, was in southwestern Ohio for Thanksgiving with his son.