Day 2 of An Adventure Against Nature and Adversity 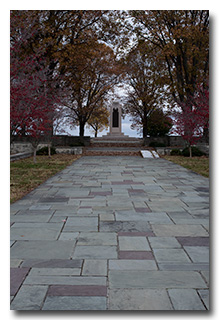 At the gate, Eric quickly deployed his antenna and radio as close to the stone wall as he could get it in an attempt to gain a bit of a wind-break. (Eric would have preferred to operate in the van but activations of National Scenic Trails are not allowed to be made in a motor vehicle.) Eric phoned Wright-Patterson AFB security forces to alert them of his activities. The security officer seemed happy to have the "heads-up" and no security members visited the site during the operation. Eric was on the air by 1859 UTC.

A highlight of the operation was seeing a Boeing E-4B Airborne and Strategic Command and Control Post aircraft climb out of Wright-Patterson Air Force Base.