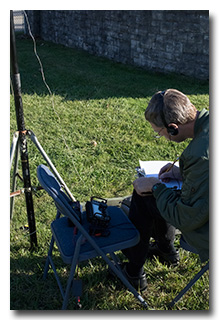 The pair arrived at the Interpretive Center about 1930 UTC. Eric stamped his Passport 2016 and spoke with the ranger who readily gave Eric permission to perform the operation at the park gate at the intersection of the park and the North Country National Scenic Trail.

At the gate, Eric and Miles quickly deployed his antenna and radio. Eric phoned Wright-Patterson AFB security forces to alert them of his activities. The security officer seemed happy to have the "heads-up" and no security members visited the site during the operation. Eric was on the air by 1950 UTC.