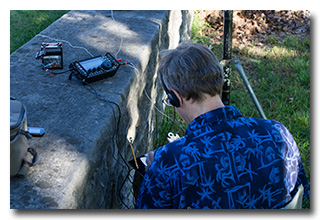 The trio (plus dog) arrived at the Interpretive Center about 2015 UTC, about an hour earlier than Eric had announced because the flying portion of the WWI Dawn Patrol Rendezvous had ended earlier than published. Eric was warmly greeted by the park staff in the Interpretive Center, who readily gave Eric permission to perform the operation at the park gate at the intersection of the park and the North Country National Scenic Trail. Eric stamped his Passport 2016 and proceeded to the gate to set up his station.

At the gate, Eric decided not to setup his folding table but to place the KX3 on the lovely stone wall, instead. With Miles' help, Eric quickly deployed his antenna and radio. Following a report from N2CX that the USAF security forces wish to be notified of such operations in advance, and because Eric's operation would extend beyond the Interpretive Center's closing time, Eric phoned the security forces using the phone numbers they had given to N2CX. The security officer seemed happy to have the "heads-up" and no security members visited the site during the operation.

Eric was on the air by 2046 UTC and made his first QSO at 2048 UTC with his good friend and fellow Southeast Ohio Radio Adventure Team member, K8RAT. The high noise level previously encountered at this location was abseant and propagation excellent. QSOs came quickly and steadily until Eric's 18th and final QSO at 2216 UTC with W0IS. Eric operated only 40m CW and all QSOs were made at the 5-watt level.

Given band conditions and Chaser-enthusiasm, Eric have continued to operate longer than he did. However, the early departure from the WWI Dawn Patrol Rendezvous had made possible a quick activation of Charles Young Buffalo Soldiers National Monument (MN18) on the way to Athens so Eric decided to tear down after the initial pile-up was worked down. Since Eric's entire operation was complete some 45 minutes prior to his announced start time several NPOTA Chasers were disappointed to miss the opportunity of working Eric at HP11. For this, Eric apologizes to those Chasers.