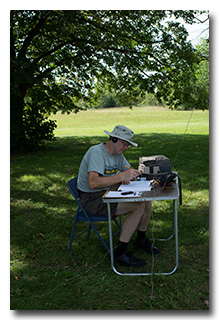 The group arrived at the Interpretive Center about 1930 UTC, spoke with the rangers, stamped their Passport 2016 books, and then returned to the park gate to set up their stations.

As at previous activations, Eric's station consisted of his Enhanced KX3 Travel Kit, his MFJ-1910 33' fiberglass telescoping mast, and a custom clipboard. In an effort to avoid direct sun and to gain as much physical distance from the other stations, Eric set up up his station under a nice shade tree at the extreme eastern edge of the park, directly across the fence from the North Country National Scenic Trail. Because he had had to call "CQ" so many times at the previous activation of the day, Eric's 5Ah gel-cell was near depletion so Eric swapped to his 10-cell Eneloop pack for this operation. Eric was set up and ready to make QSOs at about 2012 UTC. 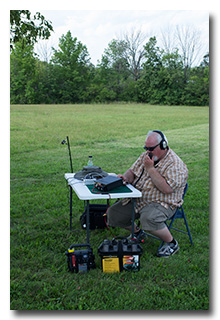 Robert also sought out shade and set up under the large tree directly opposite the park gate. For this operation, Robert chose to throw a line through the tree and deploy his EARC end-fed wire antenna for the first time. Robert again used his Ten-Tec Argonaut V transceiver and LDG autotuner.

Because the other two operators were to operated SSB, Eric chose to operate CW on 30m. He was on the air by 2012 UTC and made his first QSO at 2019 UTC with W5DAW. Eric made his 12th and final QSO of the day with NE4S at 2040 UTC. All QSOs were made at the 5-watt level. A highlight of the operation was working K0BJ at 2027 UTC after working him at both previous activations of the dayEric found signals on 30m to be stronger than they were at Hopewell Culture earlier in the day but 30m had very strong, intermittent power-line noise Eric hadn't experienced during previous activations at that location. Jeff and Rob experienced the same noise on 20m and 40m, as well.

Robert operated exclusively 20m SSB with about 18 watts output and had no trouble making more than the ten contacts required to validate his activation. He was quite pleased with the performance of the EARC end-fed antenna and said it might become his standard field antenna. 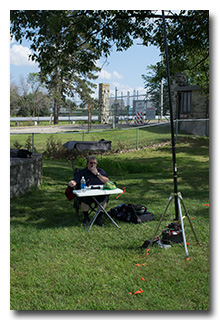 Jeff operated exclusively 40m SSB at something less than 100 watts output and also had no trouble making significantly more than the ten contacts to validate this, his third, activation. As at the previous activations of the day, Jeff was pleased with the performance of his 28' end-fed wire antenna.

As Eric was tearing down his station but while Robert and Jeff were still operating, the site was visited by a pair of on-duty USAF police. Fearing they were concerned about the van being parked near the gate, Eric hurried over to speak with them but was relieved to hear they were just curious about what was going on. One of them already had a passing knowledge of amateur radio.

After tear-down, Eric and Miles gave Robert and Jeff a quick driving tour of Area A of Wright-Patterson Air Force Base and the four had dinner at the Wings restaurant in the base Club Complex before heading back home to Athens County.