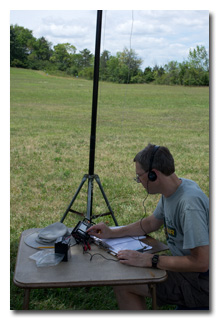 Eric and Miles arrived at the Interpretive Center about 1730 UTC. Eric stamped his Passport 2016 and spoke with the ranger.

Eric was on the air by 1752 UTC and made his first QSO at 1755 UTC with KQ4LA. Propagation was marginal due to a CME but QSOs came steadily until Eric's 12th and final QSO with AE4DT at 1819 UTC. A highlight of the operation was working WL7DN in Alaska at 1816 UTC. All QSOs were made at the 5-watt level.