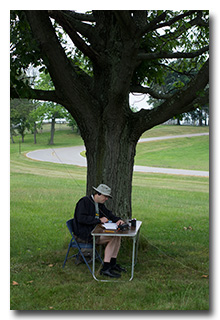 Eric and Miles arrived at the Interpretive Center right as the Center opened at 1300 UTC. Eric stamped his Passport 2016 and spoke with the ranger.

The weather was drizzly and threatening heavier rain and Eric was concerned about having to operate inside the family-van, which would mean he'd not be able to activate the NCNST portion of the two-fer. However, once he and Miles went to the actual location of the two-fer, they were pleased to find that the oak tree there provided sufficient shelter from the drizzle to allow the two-fer to proceed.

Eric was on the air by 1324 UTC and made his first QSO at 1325 UTC with WD0BL. QSOs came steadily thereafter until he made his eleventh and final QSO with W2JU at 1336 UTC. All QSOs were made at the 5-watt level.