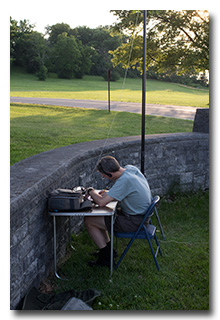 Eric had incorrectly understood that the Huffman Prairie Flying Field Interpretive Center grounds closed at dusk until Miles pointed out a sign saying the grounds close at 2000 local. Because of this sign, Eric chose to set up his station just outside the gate but still on park property.

Eric was on the air by 2349 UTC and made his first QSO at 2351 UTC with K9YKL. QSOs came steadily thereafter until Eric was politely asked to tear down and leave the area a few minutes after 2000 UTC by a DoD police officer who had come to close and lock the gate. (If there had been any question earlier about whether the area outside the Interpretive Center gate was part of the park grounds, this request by the police officer settled it!) Fortunately, by the time of this request, Eric already had the ten QSOs required to validate the two-fer activation. Eric sneaked in one more QSO, his twelfth, with W0OR at 0007 UTC. After announcing his need to QRT, Eric was saddened to hear a pile-up calling he couldn't answer. Eric apologizes to all those who were unable to work the two-fer because of his early departure.

Miles did not operate but helped with set-up and tear-down and did all of the activation photography. Miles was also instrumental in speaking with the policeman while Eric made his tenth and eleventh QSOs!