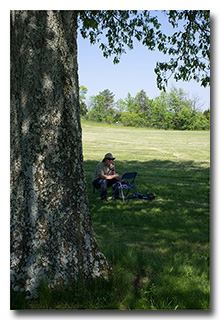 Tom chose to set up under a large and attractive tree which he used to support his EFT antenna. The instructions for the EFT said to cut the wire to find resonance. At Eric's suggestion, Tom instead wound the excess wire tightly around the end-insulator and resonance was easily found.

Eric set up his station under a smaller tree and was on the air about 1509 UTC.

Because Tom had had trouble making QSOs on 20m during his activations on the 19th, Eric gave Tom 40m and began his operations on 20m. His first QSO was with N5PHT at 1512 UTC. Thereafter, it was a continuous pile-up until Eric's 17th and last QSO with KS5Z at 1532 UTC. All QSOs were made at the 5-watt level.