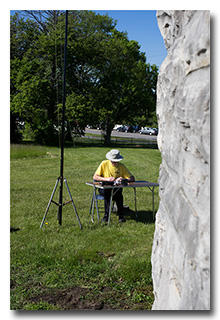 Because Tom was busily updating his blog (SWLing.com) and social media with reports of his previous two activations of the day, he chose not to set up or operate.

Eric and Miles set up the station alongside the attractive stone wall at the entrance to the park and Eric was on the air about 2115 UTC.

Eric operated only on 40m and his first QSO was with K8JE at 2118 UTC. Thereafter, it was a continuous pile-up until Eric's 16th and last QSO with K0HNC at 2132 UTC. All QSOs were made at the 5-watt level.