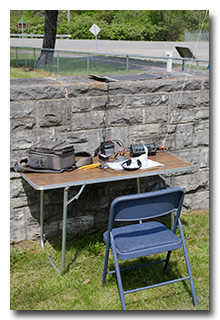 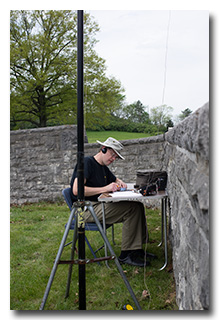 Eric and Miles set up the station alongside the attractive stone wall at the entrance to the park and Eric was ready to go on the air about 1835 UTC.

Eric began operations on 40m and his first QSO was with W9XX at 1839 UTC. Thereafter, it was a continuous pile-up until Eric's 27th and last QSO with K2ZD at 1905 UTC. Eric didn't try to make additional QSOs because the sky by then looked somewhat threatening and Vickie had subtly implied she was quite ready to be doing other things. All QSOs were made at the 5-watt level.

Eric learned a very valuable lesson during this two-fer activation, and that is to very carefully check the time of day when performing an activation of a unit that one has activated the previous day. Eric knew before arriving at the Dayton Aviation Heritage NHP that he mustn't make his first QSO until about 1900 UTC in order for the operation on North Country National Scenic Trail to count as a distinct activation. However, Eric forgot this in the excitement of setting up and made his first QSO at 1839 UTC, just 23 hours and 58 minutes after he finished the previous day's operation on NCNST at Tom Jenkins Dam in Burr Oak State Park (link), two minutes shy of the required 24 hours. Upon uploading his logs to Logbook of the World, Eric discovered to his dismay that the operation at Tom Jenkins Dam on May 6 and the operation at Huffman Prairie Field Interpretive Center on May 7 counted as a single activation of North Country National Scenic Trail.