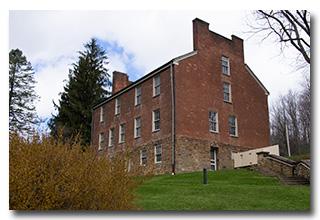 For this second activation of Fort Necessity, Eric asked the ranger if he could set up his low-profile station at the Mount Washington Tavern, which is higher in elevation than the Visitor Center. Since the Tavern is still closed for the season, the ranger gave permission for Eric and Miles to set up in the Tavern parking lot. As was the case for the first activation of Fort Necessity, the station was Eric's Enhanced KX3 Travel Kit.

Once at the Mount Washington Tavern, Eric parked the car under a friendly tree, threw a line over a branch, pulled up the 28' end-fed wire. and deployed three counterpoise-wires. Because of the cold temperature (43°) and gusty winds, Eric and Miles again decided to operate in the car, this time with the KX3 sitting on the dashboard and with the car door closed.

Eric's first QSO was with W9RF at 1643 UTC and he made QSOs steadily until his eleventh QSO at 1659, when the pile-up was done. Eric operated only 40m CW. As with the previous activations, the noise-floor on 40m was very low and signals were strong.