While speaking with the rangers in the Visitor Center, Eric and Miles learned that all NPOTA activations at Antietam National Battlefield are to take place in an especially-identified location at the park, in the overflow parking area across the road from the Visitor Center and very near the historic Dunker Church. The rangers were very helpful and seemed to be very interesting in the activation.

The station for this activation was Eric's Enhanced KX3 Travel Kit. 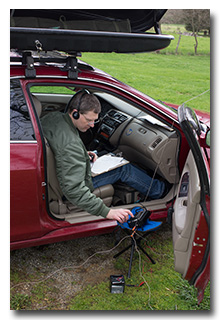 Once at the designated NPOTA area in the overflow parking area, Eric parked the car under a large tree in the center of the field, threw a line over a friendly branch to support the 28' end-fed wire, and deployed three counterpoise wires. Because temperatures were falling and the skies were still a bit threatening, Eric and Miles decided to operate once again inside the car and Eric placed the KX3 on a folding camp-stool in the open car door.

Eric called CQ just a few times before making his first QSO with WB8TLI, at 2033 UTC. From that point on until Eric made his 42nd QSO at 2116, it was non-stop pile-up action. Apparently, many chasers needed Antietam! Eric operated only 40m CW and, as at the previous activations, the noise-floor on 40m was very, very low and signals were strong.

As at previous activations on this day, highlights of the activation included QSOs with Athens-based WT8E and with Eric's good friend K8RAT who was the last QSO of the activation. K8RAT said he had to wait until the pile-up had died down before he could be succeed in being heard.