The trio arrived at the Battlefield about 1730 UTC, about half-an-hour after the announced start-time of the operation. Eric had (mis)understood from the park's website that there was no NPS Visitor Center at the park but the trio did, if fact, find a Visitor Center. On this particular day, the Visitor Center was closed for a private function. Eric had also (mis)understood from the park's website that the NPS stamp for the park was available only at the Toledo Public Library but he found the stamp to be available at the large map at the start of the trail around the Battlefield. Eric took the opportunity to stamp his Passport 2016 before he, Mike, and Miles examined the site to determine where to set up. 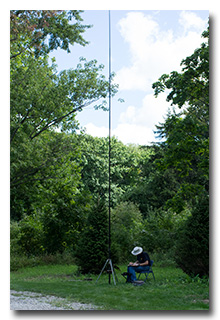 No picnic tables were found and the only benches seemed to be where a group was playing cornhole. Fortunately, two spots for the stations were found adjacent to the gravel parking lot; one provided a useful tree to support Mike's antenna and the other provided a shaded spot with clear space for Eric's 33' fiberglass mast.

As at previous activations, Eric's station consisted of his Enhanced KX3 Travel Kit, his MFJ-1910 33' fiberglass telescoping mast, and a custom clipboard. After helping Mike determine which of Eric's back-up antennas to use, Eric erected his mast, deployed his antenna, and set up the rest of his station on a camping stool, and he was on the air by 1824 UTC.

Mike's station consisted of Eric's field-proven Elecraft K2 and Mike's American Morse Equipment Bushwacker paddle configured as a cootie-key/sideswiper. The chosen tree wasn't well suited for hanging Eric's 44' doublet so Eric, Mike, and Miles fashioned a field-expedient antenna by cutting Eric's 58' end-fed 80m antenna into a 28-1/2' end-fed wire and two counterpoise wires. Miles threw a line through the tree and pulled up the new end-fed wire. Mike fed the antenna through a 20m bandpass filter and a 4:1 balun. Mike was on the air, ready to make QSOs, about the same time Eric was.

Eric operated only 40m CW. His first QSO was with K8SIA at 1825 UTC after only two calls of CQ. QSOs came continuously until Eric's 18th and penultimate QSO, a QSO with K0JE at 1841 UTC. Because Mike was having trouble making QSOs on 20m, Eric signed off and surrendered 40m to Mike. Eric's final QSO of the day was with Mike on 40m at 1902 UTC. All Eric's QSOs were made at the 5-watt level. 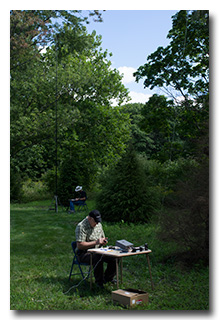 Mike started his operation on 20m CW but had some trouble making QSOs. He made six QSOs on 20m before Eric gave him 40m. During Mike's time on 40m, Eric noticed receiver issues that indicated an intermittent connection of the 28-1/2' end-fed wire to the balun's binding-post. They tightened the connection at the binding post and rig performance improved for Mike. Mike finished the day with six QSOs on 20m and five QSOs on 40m. Mike's trouble making QSOs on 20m may very have been caused by an intermittent signal caused by the poor antenna connection. All of Mike's QSOs were made at the 5-watt level.

An expected highlight of the operation wasn't actually part of the radio operation iteself—it was seeing a formation of four F-16s from the 180th TFW fly directly over the Battlefield. None of the three operators had known that the 180th TFW's base was located close to the park. The three speculated that perhaps the formation fly-over had been in support of a ceremony in Toledo.

On the drive home, the trio unexpectedly came upon the park's Fallen Timbers State Memorial. They didn't have time to explore that portion of the park but what they did see was lots of grass and many good trees; this portion of the park might make a better location than the Battlefield for subsequent activations of AA06.