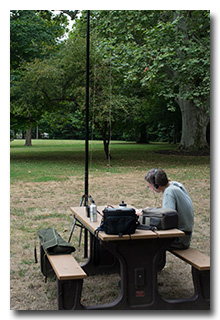 The pair arrived at the Visitor Center a few minutes later than planned. Eric had already jumped through the necessary hoops to procure a Special Use Permit to operate at this single-asterisk "sensitive" NPS unit. This was good because the ranger working the Visitor Center was unfamiliar with NPOTA, but since Eric had a valid Special Use Permit, the ranger allowed Eric free-reign to set up and operate within the picnic area.

After Eric stamped his Passport 2016 he and Miles chose a picnic table and set up the station. While they were setting up, a second ranger--one who did seem familiar with NPOTA and amateur radio, warned them that storms were moving from the west.

Eric operated only CW on 40m and his first QSO was with K8RAT at 1624 UTC. QSOs came continuously until the drizzle started just as Eric was completing his 29th and final QSO with N4USS at 1648 UTC. All of Eric's QSOs were made at the 5-watt level.