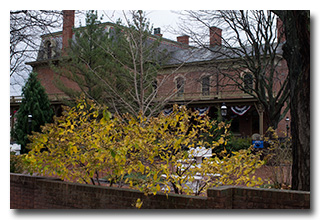 The pair arrived at the Visitor Center to find that the Alliance ARC, W6LKY, was performing a multi-transmitter activation of the unit at the Saxton McKinley House. Eric had known in advance that that the club was planning an activation that overlapped his and had brought 20m and 40m bandpass filters. Eric spoke with John Myers, KD8MQ, and the W8LKY 20m SSB operator agreed to give up 20m long enough for Eric to validate his activation using 20m CW.

Before setting up, Eric and Miles entered the Saxton McKinley House to speak with the staff and to stamp Eric's Passport 2016. Wishing to get even a little bit of separation between his station and those of W6LKY, Eric discussed options with the staff and decided to set up his station in a second parking lot, one separated from the lot the W6LKY group was using by a small park. This location didn't provide much separation but it did provide a nice tree to support Eric's 28½' end-fed wire. Before moving the car, Eric took the opportunity to work W6LKY on 146.52 simplex at 1610 UTC.

Eric's HF station was his Enhanced KX3 Travel Kit and a custom clipboard. Because of the cold temperature, wind, and precipitation, Eric decided to operate inside the car. Eric and Miles quickly tossed a line over the handy tree, pulled up the end-fed wire, and deployed two radial wires. Eric didn't initially install a bandpass filter and found that he received no interference from W6LKY. Eric was on the air by 1624 UTC.

Eric began operations on 20m CW and his first QSO there was with KA7T at 1625 UTC. QSOs came steadily until his 13th and final QSO with AD7L at 1640 UTC. Eric's friend Mike, K8RAT, had asked that Eric try to make a QSO with him on 80m so Eric installed a 4:1 balun between his KX3 and his short end-fed wire; the KX3's ATU matched the antenna but, unfortunately, neither Eric nor Mike could hear the other station so no QSO was made. (Mike was also unable to hear W6LKY on 40m.) All of Eric's QSOs were made at the 5-watt level.

Eric would have liked to operate longer but had two more activations planned for the day and relinquished the bands to W8LKY. 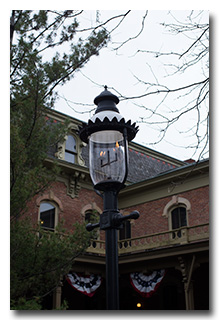 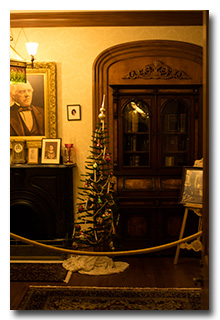