The pair arrived at the Visitor Center much, much later than planned following a drive from James A. Garfield National Historic Site that seemed for all the world that the Fates were conspiring to prevent a successful third activation of the day. The pair encountered torrential rain and thunderstorms; not one, but two accidents on I-271S and I-77S that slowed the flow of traffic to a crawl; and the complete diversion of all traffic off of I-77S at the I-77/I-76 exchange. Fortunately, the pair survived this very Odyssean journey and Miles was able to successfully navigate the pair to Canton and First Ladies National Historic Site despite the trials; they arrived at the park just as the storms were clearing.

Eric had known that the park was to be closed all day due to special road-closures in the neighborhood throughtout the day for a parade and other events. However, whether it was due to the storms or simply to the pair's very late arrival, all the roads near the park were open. What Eric hadn't known beforehand was that First Ladies is located immediately adjacent to the Canton Police Department. Any one of the dozens of police officers arriving at or departing from the station might have had legitimate curiosity about what was going on in the parking lot of the closed-for-the-day National Historic Site. Eric had printed the exchange of emails with the staff of the park as proof of permission, just in case, but these turned out to not be needed. (Miles did notice, however, that as least two officers did give the operation some very long and intense looks before deciding nothing untoward was occuring—perhaps they saw Eric's callsign license-plate and were familiar with previous NPOTA activations at the Park?) 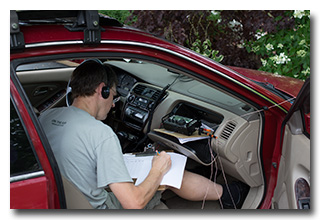 Eric's station was his Enhanced KX3 Travel Kit and a custom clipboard. The paved parking lot prevented deployment of the MFJ-1910 33' fiberglass mast so the 28' end-fed wire antenna was tossed over a convenient flowering tree. Because of the lingering possibility of rain, Eric decided to operate inside the car.

Eric operated only CW on 40m and his first QSO was with K8FN/4 at 1942 UTC, almost two hours after Eric's announced operation-time. QSOs came continuously until the 13th and final QSO with AA4QE at 1955 UTC. All of Eric's QSOs were made at the 5-watt level.

Eric would have liked to operate longer but home was beckoning from 121 miles away and Miles had a further 50 miles to drive that evening for a week as an adult-helper at youth-camp.)

Miles did not operate but helped Eric with set-up and tear-down, did all of the activation photography, and stood ready to buffer Eric and his operating from any police officer intrigued by the goings-on.