The pair arrived at the Boston Store Visitor Center later than planned and found the place jam-packed with hikers and bicyclists. After Eric stamped his Passport 2016 and spoke with a ranger, he and Miles drove the short distance north to the Columbia Run Picnic Area where they set up for the activation. 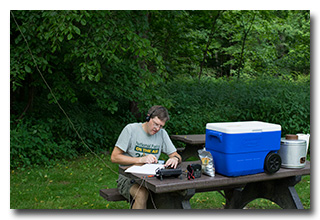 Eric's station was his NPOTA station: his Enhanced KX3 Travel Kit, and a custom clipboard. Eric chose to hang the 28' end-fed wire from a handy tree instead of using his MFJ-1910 33' fiberglass mast and set up the rest of the station on a picnic table.

Miles and Eric would have enjoyed touring more of Cuyahoga Valley National Park but had to drive immediately to their next destination, James A. Garfield National Historic Site (NS39) to avoid arriving there late, too.