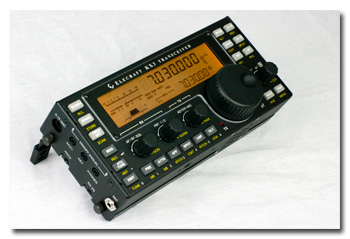 The KX3 is a compact, 160-6 meter, all-mode transceiver that's ideal for both new and experienced operators. Its unique features meet the requirements for home station use, portable, mobile, and even hand-held operation.

Since the KX3 is a software-defined-radio (SDR), you'll be able to extend its capabilities using computer applications, and add new features via free firmware upgrades. But the KX3 is also the only compact transceiver that combines the flexibility of an SDR with a full-size front panel and display, allowing operation with or without a computer.

Despite its small size, the KX3 can be configured as a fully self-contained amateur station, with an internal antenna tuner, battery charger, 2 meter module, and attached CW keyer paddle. These options can be added at any time. Current drain is also very low for a full-featured transceiver, reflecting our commitment to field operation. For mobile and home use, you can boost the KX3's output to 100 watts with the optional KXPA100 amplifier.

When it's time to take on the challenge and adventure of amateur radio, your KX3 will be ready. 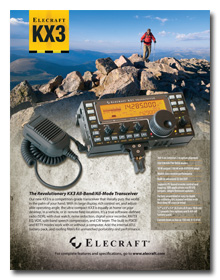 I've equipped my KX3 with the beautifully-made Side KX Endplates and Cover (link) by Scott Bastian, AK6Q (photos: 1 | 2 | 3 | 4). Since the Side KX Endplates have already prevented damage to my KX3 from a fall onto a concrete floor I consider the money spent on these add-ons to be money very well spent, indeed. More recently, I installed AK6Q's Cover for KXPD Paddle Port on my KX3.

I've equipped my KX3 with a Cooler KX Lite heat-sink (link) by Fred Meier, VE7FMN. I am very pleased that the the addition of this beautifuly engineered and machined heatsink allows me to run 6m AM at the 10-watt level during a weekly local net. (photos: 1 | 2).

I don't plan to keep batteries installed inside the KX3 nor do I plan to install the KXBC3 Internal NiMH Charger / Real-Time Clock module. I remain undecided about adding the KX3-2M 2m module.

Having given up on dual-lever keyer paddles, I chose not to purchase the otherwise excellent Elecraft KXPD3 Precision Iambic Keyer Paddle.

For voice-modes with the KX3, I use the Elecraft MH3 Hand Microphone and have received reports of very good transmit audio.

UPDATE: In mid-July, 2017, while trying to perform the Transmitter Gain Calibration procedure, I discovered my KX3 has no output on 160m. Fortunately, my KX3 does produce proper output on all the other bands. I'm exchanging emails with Craig, W6WL, at Elecraft to try to resolve this problem.

UPDATE 2017-10-27: After it became apparent my KX3's failure to generate output on 160m wasn't caused by a firmware update, a menu setting, or any other easily diagnosed issue, I sent my KX3 back to Elecraft for service. The Elecraft tech I have been corresponding with warned me of a 15 to 20 business day backlog on upgrades and repairs so I'm unlikely to see my KX3 again before December arrives. (Somewhat ironically, I took my KX3 to the Post Office on the fourth anniversary of my building of the KX3.)

UPDATE 2017-11-14: My repaired KX3 is on its way back to Ohio. Joe, the Elecraft technician, replaced the 160m LPF relay (K7) to restore output on 160m. Joe also re-installed firmware MCU 2.76 and DSP 1.50 and installed a capacitor upgrade on the control panel board to provide improved power supply filtering for a PX3. Finally, Joe performed the following tests and calibrations before reporting "KX3 SN 5284 has been calibrated & tested, performance meets or exceeds factory specifications":

UPDATE 2018-10-25: I discovered while setting up for the Stew Perry Top Band Distance Challenge on October 20 that my KX3 again has no transmitter output or receiver sensitivity on 160m. As before, my KX3 produces proper output on all the other bands. (This failure comes less than a year after my KX3 was fixed for no output on 160m and I am very disappointed by this turn of events.) I emailed the Elecraft Service Department asking what the next steps are in getting my KX3 restored to full functionality and received an RSA number on the 24th.

UPDATE 2019-01-04: Thinking the problem might be solely within the KXAT3, I removed the KXAT3 from my KX3 and verified proper operation on 160m. However, 160m operation was again lost after the KX3 was left disconnected from power for a period of a few hours, so the problem is clearly not solely within the KXAT3. My KX3 will begin traveling back to Elecraft for diagnosis and repair today.

UPDATE 2019-01-25: My repaired KX3 is on its way back to Ohio. As Joe did in 2017 (see above), Alberto replaced relay K7 in the 160 low-pass filter circuit on the KX3 RF board. Alberto found no updates that needed to be perfomed. Alberto performed the following tests and calibrations before reporting "KX3 SN 5284 has been calibrated & tested, performance meets or exceeds factory specifications":

Elecraft honored my request to perform the repair under warranty and the bill was $18 for return shipping to Ohio.

In a follow-up email with Carl at Elecraft Customer Support, I learned that of the well over 10,000 KX3 in the field, Elecraft has seen relay K7 fail only twice—and both failures were in my radio. The possibility of component failure being very low, Elecraft's techs suspect the relay failures in my radio have something to do with how I use the radio. I'm to send Elecraft detailed information about my operating characteristics so that perhaps the techs can determine the root cause of the failures.

Update 2019-05-27: During a Parks on the Air (POTA) activation at Hocking Hills State Park on May 25, I discovered I was able to hear CW on both sidebands—some of the DX stations participating in the WPX CW contest were quite strong on the wrong sideband. Back at home after the activation, I re-ran the KX3 Opposite Sideband Null calibration procedure as outlined in the KXFL3 Roofing Filter instructions, using an Elecraft XG1 signal generator instead of the KX3's internal 16MHz oscillator. I found that the Phase and Gain parameters were way out of whack and in finding the correct settings, I found myself selecting the same settings I had found when I initially installed my KXFL3. As noted above, Alberto at Elecraft had verified the RXSBNULL settings in January. Why did my KX3 lose the correct settings? I don't know, but since I have not upgraded my KX3's firmware since the rig came back to me from Elecraft, the culprit can't be a firmware upgrade overwriting the settings. I'll keep an eye on my KX3 to see if this problem returns.

Building the KX3: I built my KX3 during the weekend of October 26-27, 2013, taking my time in order to avoid errors and to maximize the enjoyment of the process. The build went very smoothly until it came time to mount the two plastic AA-cell battery-holders. At that point, the supplied #2-56 flathead screws were just short enough that I managed to strip out the first couple of threads of one of the aluminum standoffs. I wasn't able to acquire a suitable replacement piece locally but I was able to mount the battery-holders with the supplied hardware by counter-sinking the mounting holes in the battery-holders. Unfortunately, in reinstalling the RF Board after diagnosing the stripped standoff I sheared off one of the #4-40 male-female aluminum standoffs that are intended to secure the KXAT3 internal antenna tuner module. I completed the KX3 build without the KXAT3 module, using a pan-head screw in place of the standoff, and installed the KXAT3 module the day the replacement standoff arrived from Elecraft.


Photos of the KX3 Transceiver build: