Note: I no longer own an Elecraft KX1, having sold it in September, 2013 to help fund the purchase of an Elecraft KX3 which is the heart of the KX3 Travel Kit. This page about the KX1 Mini Travel Kit will remain active for archival purposes.

The KX1 Mini Travel Kit is under continuous development. This page will change as various ideas are tested and accepted or rejected. 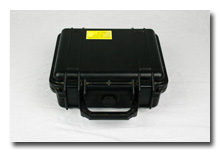 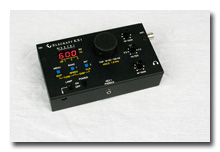 The KX1 is a small, lightweight, trail-friendly-radio which is optimized for portable operation after (or during) human-powered-transport (bike/hike/canoe/kayak). The CW-only transceiver covers the 20, 30, 40, and 80m bands and features a sensitive superhet receiver with variable-bandwidth crystal filter, RIT, S-meter, DDS VFO with three tuning rates, three-digit LED display, memory keyer, battery voltage monitor, and a 1-watt to 4-watt transmitter with full QSK, all in a 1.2" x 2" x 5.3" package that weighs less than a pound with batteries installed.

The KX1 can operate over a voltage range of 6.5vdc to 14vdc. Internally, the KX1 holds six AA cells. A coaxial power socket is provided for connection to an external power source. Conveniently, when internal batteries are installed and external power is connected, the rig will use the source having the higher voltage.

I am researching various physically-small, lightweight, external battery packs to find one that will allow for 4-watt transmit power over a reasonable time period without breaking the back, legs, or bank.

NOTE: The following paragraphs on ten-cell battery-holders and AA NiMH cells were updated after I discovered a serious problem with my original experimental methodology.*

Currently, I'm experimenting with a pair of ten-cell AA battery-holders: an old one of unknown provenance (photo) and a new, mechanically-stronger one from Batteries America (p/n 10AAT, photo). When filled with ten AA NiMH cells, the resulting battery-packs provide about 14v at full-charge. The use of two AA dummy-cells will also allow the use of eight lithium primary or alkaline cells in an emergency.

I became concerned about using this style of spring-terminal battery-holder when I found an article (link) by Phil Salas, AD5X, in which he reported that this sort of battery-holder is likely to display significant voltage drop under load. 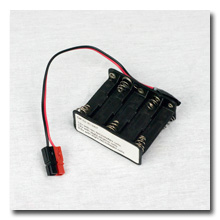 I tested the original battery-holder with ten 1900mAh NiMH cells and my KX1 transmitting into a dummy load. In addition to measuring whole-pack voltage-drop, I measured the voltage-drop of each of the individual 2,000mAh cells as I transmitted into the dummy load on 20m.

The sum of these individual drops was 0.52v, so I'm losing 0.24v in the spring-contacts and/or battery-holder's "transistor battery" output connector. 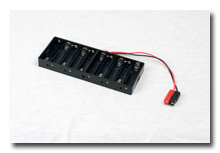 After replacing the original nylon connector with a pair of Anderson Powerpoles, I tested the same 2,000mAh NiMH cells in the new, more rugged battery-holder, this time only on 20m:

The 0.20v ~ 0.24v drop from the spring-terminals doesn't seem excessive to me and the difference in these measurements between the two battery-holders is probably not significant. I am more concerned by the 0.53v ~ 0.54v voltage-drop I measured in the individual cells. It is likely that these older 2,000mAh cells, which have been cycled many times, are exhibiting greater voltage-drop than new cells would. To test this theory, I purchased new 2,100mAh cells to measure.

I measured the new cells as above, again on 20m into a dummy load, and found that with each of the battery-holders, the sum of the individual cell voltage-drops was 0.22v, so my speculation appears to have been correct--the new cells do have lower voltage drop under load than the old cells do.

(As an aside, the new 2,100mAh NiMH cells are marketed by Polaroid and cost $6 per four-pack at Big Lots; the least expensive AA NiMH cells available at Batteries America, 2,500mAh Sanyo cells, cost $3 each at the time of this experiment. I don't know if the Polaroid cells will last for as many cycles as the probably-higher-quality Sanyo cells would but trying the significantly less expensive Polaroid cells seemed like a a good gamble.)

As indicated above, the new battery-holder (Battery American p/n 10AAT) is more rugged than my original battery-holder; it holds the AA cells more securely and and doesn't use a "transistor battery" connector to connect to the load. I replaced the original nylon connector with a pair of Anderson Powerpoles. This battery-holder will be my preferred battery-holder for field operations with the KX1.

In his article (link), Phil Salas, AD5X, recommends foregoing battery-holders in favor of soldered/welded battery packs but I will continue to use battery-holders. I prefer to charge my NiMH cells individually, using an intelligent charger, rather than charging an entire pack. In addition, my KX1 draws significantly less current on transmit than Phil's IC-703 does so the the I•R losses I'll experience will be less significant than that which Phil experienced.

Currently, the external battery-pack doesn't fit in the Pelican #1200 case.

I would love to try a 13.2vdc 2.3Ah 4S1P nanophosphate Lithium Iron (LiFePO4) battery pack by A123 (link). The A123 battery packs have very high capacity and are extremely lightweight but are also very expensive; an A123 pack wouldn't break the back or legs but would be very likely to break the bank! (See here for discussion about use of a 4S1P with a KX1.)

* I discovered when testing my new battery-holder that the previous measurements of the old and new NiMH cells in the original battery-holder had been made with the KX1 transmitting into a 50Ω dummy load with the KX1 autotuner configured in tune mode instead of in bypass mode; because the KXAT1 autotuner doesn't sense a mismatch and automatically tune, this meant that transmitter current--and the measured I•R voltage losses--might be also be significantly different than with the KX1 transmitting into a matched load. Comparisons of my original numbers to measurements made later of the new battery-holder wouldn't be meaningul, so I had to do all the measurements again. 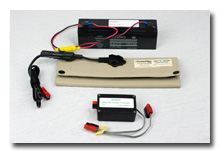 For long-duration operations, I have a small 2.2Ah gel-cell, a PowerFilm (link) FM15-300N 5-watt foldable photovoltaic panel (photos: 1 | 2), and a WB8VGE Micro-M charge controller (link, ARRL Members Only). The interconnecting cables are made such that I can charge the battery while the battery is simultaneously supplying power to the KX1. These items, although small, won't fit inside the Pelican #1200 case but will fit very easily within a daypack or bicycle pannier. (The FM15-300N panel is a "blemish/second" I purchased directly from PowerFilm at the 2012 Dayton Hamvention--I wish I had had the foresight to purchase several of these!)

I am researching ways to charge my ten-cell NiMH pack with the Powerfilm solar panel but NiMH cells seem to be finicky about how they are charged. If I'm unable to find an easy way to solar-charge the NiMH pack, I might consider filling the ten-cell battery holder with 1,100mAh NiCd cells (Sanyo Cadnica Extra, available here at Batteries America; $2.95/ea--ouch!). NiCds should be very easy to solar-charge with the Powerfilm panel and Micro-M charge controller. (Note to self: 1.45v is the full-charge voltage for a NiCd cell.)

My KX1 covers the 20, 30, 40, and 80m bands. I would like to find an easy-to-deploy antenna that performs well on all four of these bands but packs small enough to fit in the Pelican #1200 case.

The KXAT1 Internal Automatic Antenna Tuner is optimized for use with random-length wire antennas with one or more counterpoise wires. The KX1 manual recommends a length of 24' to 28' for 20, 30, and 40m; the manual makes no recommendation for the length of an 80m end-fed wire. 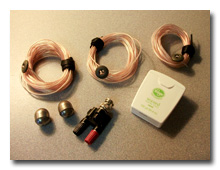 For end-fed wires, I use a BNC-to-dual-banana-socket adapter to connect the radiator and counterpoise wires to the KX1. I have been using a length of 28' for 20, 30, and 40m (photo). I need to experiment to find a wire length that works well on 80m.

I am curious to see if the KXAT1 tuner will tune a W3EDP wire antenna on all four bands; if it does, I might try to build a W3EDP in a form-factor small enough to carry within the Pelican #1200 case.

If end-fed wires prove to be ineffective in the field I will try variations of the 44' and 88' doublets I've used successfully with the K2 Travel Kit. Because of the feedline, it will be challenging to build a doublet that's small enough to fit within the Pelican #1200 case; a doublet might need to be carried separately.

I have verified that the KXAT1 easily tunes a 44' doublet on 20m and 40m without a balun.

To hang wire antennas in trees, I carry a 100-yard spool of dental floss and a couple of large fishing weights (photo).

The Key & Paddle
(return to top) 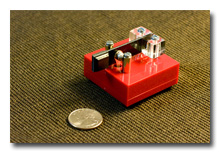 Originally, I had the KXPD1 Keyer Paddle for use with my KX1. This key is a lovely piece of engineering but, unfortunately, I was unsuccessful in gaining any proficiency with the key and eventually sold it.

I carry either of two Whiterook keys in the KX1 Mini Travel Kit: an MK-33 single-lever paddle (photo | link) or an MK-22 straight key (photo | link). I find it to be quite easy to send good code with either of these simple, inexpensive, and very lightweight keys.

NOTE: The MK-33 and MK-22 keys require different cables when used with an Elecraft transceiver: the MK-33 paddle requires a stereo-to-stereo cable and the MK-22 straight key requires a mono-to-stereo cable; if the wrong cable is used with the MK-22, the KX1 Menu button stops functioning and the KX1 can lock in transmit.

(Note to self: A MK-36 Mini-Key Leg Mount (link) might be a useful add-on for the Whiterook keys.)

I have printed the "operating" portions of the KX1 and KXAT1 manuals; these, along with log forms and paper for CW copy are carried in the Pelican #1200 case above the egg-crate foam in the lid. 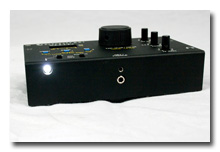 Since the KX1 includes an effective built-in log-book lamp (photo), I don't need to carry a separate field-portable lamp in the KX1 Mini Travel Kit.

For receive-audio, I use a pair of JVC HA-F150-B "Gumy" ear-buds. To prevent tangles, I carry them within the KX1 Mini Travel Kit in a 35mm film canister. I don't know how rugged they will prove to be but they pack very small, have the recommended 108db/mW sensitivity, were available locally, and cost only $9. (Immediately after purchasing the JVC earbuds, I found not one but two new pairs of Sony earburds in my junk-box; I will keep these as spares in case the JVC earbuds break or are lost.) I am not completely satisfied with the way the JVC and Sony ear-buds fit in my ears but they will work until I find something more comfortable.

In case of trouble, I carry a small common screwdriver and an Allen wrench that fits the tuning-knob set-screws.

I built the KX1 Mini Travel Kit to allow me to engage in impromptu human-powered-transport field operations. I will be carrying the station while biking, hiking, and canoeing/kayaking.

I have devised an easily-mountable, easily-removable, rear-rack-fixture to safely transport the KX1 Mini Travel Kit on my bicycle. With it, the KX1 Travel Kit hangs securely on the right side of my bicycle and a pannier or camera-bag can be hung on the left side of the bicycle. 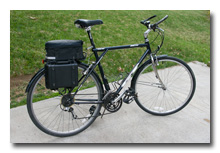 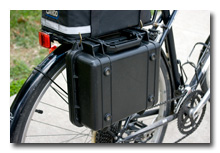 Alternately, I can hang two panniers on the bicycle's rear-rack and carry the KX1 Mini Travel Kit in one of them.

I've carried the KX1 Mini Travel Kit on my bicycle several times, including for the 2012 Flight of the Bumblebees, 2012 NE QRP Afield, and 2013 QRP to the Field events.

I've successfully hiked with the KX1 Mini Travel Kit in a daypack. I may experiment with clipping a shoulder strap to the Pelican #1200 case for use on very short hikes.

I need to verify that the KX1 Mini Travel Kit floats; if it does, the waterproof nature of the Pelican #1200 case should make transport of the station in a canoe or kayak pretty straight-forward.

In order to increase visibility of the KX1 Mini Travel Kit in the water in the case of a capsized canoe or kayak, I will add some reflective tape to the Pelican #1200 case before taking the station onto the water.