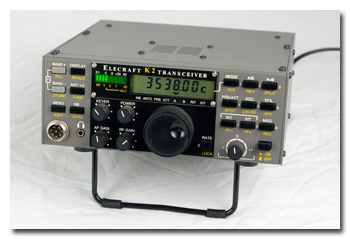 The Elecraft K2 is a high-performance, synthesized, CW/SSB transceiver that covers all HF bands. It is a true dual-purpose transceiver, combining the operating features you'd expect in a home-station rig with the small size and weight of a rugged, go-anywhere portable.

You can customize your K2 by choosing from a wide range of additional options:

In addition to the options, a companion enclosure the same size and style as the K2 is available for those who wish to build their own matching station accessories (model EC2).

The K2 is an intermediate-level kit, yet you'll be pleasantly surprised at how uncomplicated it is to build. All of the RF (radio-frequency) circuitry is contained on a single board, while two plug-in modules provide front panel and control functions. Wiring is minimal, unlike traditional kits which depend on complex wiring harnesses.

A unique feature of the K2 is that it provides its own built-in test equipment, including a digital voltmeter, ammeter, wattmeter, complete RF probe, and frequency counter. These circuits are completed early in assembly, so they're ready to be used when you begin construction and alignment of the RF board. We also provide complete troubleshooting and signal-tracing information. 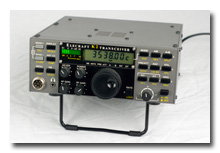 Since my K2 was already built when I purchased it, I can't comment on the building of a K2. (See the links below to find descriptions and photos of K2 builds by Dave Richards, AA7EE, and Alan Wilcox, W3DVX.) I did, however, install the KAT2, KAF2, and KBT2 modules and I built and installed the K160RX module. (I also installed, but subsequently removed, the KDSP2 DSP filter/clock module; see next paragraph.)

I bought a used KDSP2 DSP filter/clock (revision DSP 03.10 CTL 3.10) to install in my K2. Upon installing it, I discovered that the KDSP2 introduced a hiss in my K2's audio. To diagnose this hiss, K8RAT and I installed the KDSP2 in his K2 and found the same audio hiss to be present in his rig, an indication the problem is within the KDSP2 module and not within my K2. In addition, W8MHV's KDSP2-equipped K2/100 displays the same hiss, which indicates the hiss might be inherent in the design of the KDSP2. I've found the hiss in my K2 to be objectionable and have reinstalled the KAF2. Update: I've given the KDSP2 to K8RAT with the hope it will help him deal with a strong local noise-source. 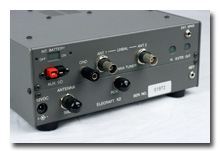 I didn't wire the KBT2 internal battery module as designed by Elecraft. A KBT2 bracket secures a 2.2Ah sealed lead-acid (SLA) battery within the K2; the battery voltage is taken through an inline-fuse to a rear-panel Anderson Powerpole pair (photos: 1 | 2) and a short external jumper takes the battery voltage from the Powerpoles to the K2's coaxial power connector. This scheme allows me the flexibility to power my K2 with the internal battery while simultaneously charging the battery with a small solar panel and charge controller while in the field or, while in the hamshack, to charge the battery with a three-stage charger while powering the K2 with an external power supply. The 2.2Ah SLA battery was one I had on-hand; eventually, I will replace this battery with the proper PowerSonic PS-1229 2.9Ah battery.

My K2 came to me configured for use with a Kenwood microphone. I have re-configured it to work with an Icom HM-12 microphone I had on hand. I'd like to replace the HM-12 with a Heil Handi Mic HC-5 (link) or the less expensive MFJ-290K; if I do, I'll re-wire the K2 for the simpler Kenwood configuration.

This rig has been very reliable; other than realigning the crystal filters, the only real repair I've needed to do since my purchase in 2008 has been to replace the AF and RF gain potentiometers in early 2012. 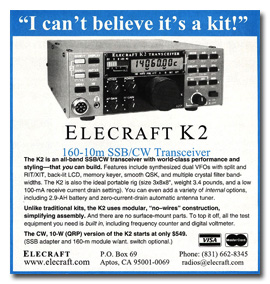 Manuals: Because of changes to the K2 kits over time, several versions of the K2 manual exist. These are available as PDF downloads at Elecraft (link). On the Elecraft site, click "Manuals & Downloads" in the menu, then select "K2". The latest manual will appear in the resulting list. For older versions, click "Manual Archive Page".