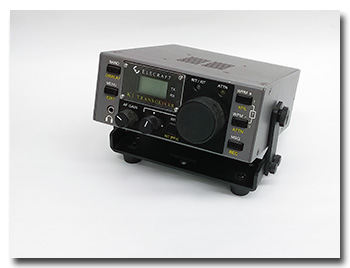 With receive-mode current drain of about 55 mA, built-in keyer, and a stable, low-frequency VFO, the K1 is ideal for portable operation. It's also one of the smallest multi-band HF transceivers available—smaller than many single-band rigs. And, when used with the optional wide-range tilt stand (KTS1), the K1 is truly trailfriendly. The tilt stand comes with long arms for ground-mounting, as well as shorter arms for desk-top use.

Like our all-band K2 transceiver, the K1 uses modular construction, allowing it to adapt to your operating needs. The Filter board covers either two (KFL1-2) or four (KFL1-4) bands, and a different Filter board can be swapped in at any time. There are two plug-in options, including a noise blanker (KNB1) and automatic antenna tuner (KAT1). There's also an internal AA-cell battery option (KBT1). These options can be installed easily at any time.

The K1's modular assembly will also appeal to first-time builders. The kit requires almost no point-to-point wiring, unlike earlier designs that used wiring harnesses. The K1 even provides its own built-in test equipment, including battery voltage monitor, wattmeter, and frequency counter. The manual provides complete troubleshooting and signal tracing procedures, and you'll find further support on our website, www.elecraft.com.

I purchased my K1 in the Fall of 2019 at the Parkersburg / Wood County Hamfest.

Since my K1 was already built when I purchased it, I can't comment on the building of a K1.

Update 2022-03-16: I thought to measure the K1's output power again, to verify that vibration from many trips in the automobile hadn't led to misalignment, and was distressed to see that power output was greatly reduced on 20m and 40m. Convinced I would need to again perform the alignment steps, I put the transceiver away until I had to the time to properly tackle the realignment. A few minutes later, I suddenly wondered if the KAT-1 internal ATU had been engaged, hooked up the rig again, and found that the KAT-1 had, indeed, been enabled. Setting the KAT-1 to "CALS" mode allowed the K1 to again produce full output as measured on an external wattmeter into a dummy load. Important Tip: Always check to make sure the KAT-1 is disabled before panicking about lower-than-normal power output!