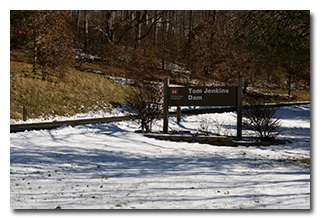 One member of the Southeast Ohio Radio Adventure Team succeeded in performing a valid two-fer activation of Wayne National Forest, K-4521, and North Country National Scenic Trail, K-4239, in Ohio as part of the the Parks on the Air (POTA; link) program while simultaneously participating in the Arizona ScQRPion's annual Freeze Your B___ Off (FYBO) field event. On February 6, 2021, Eric McFadden, WD8RIF, visited Wayne National Forest and North Country National Scenic Trail at Tom Jenkins Dam on a cold but sunny winter morning. Eric participated in FYBO in the Single-Op, Field category.

Eric arrived at the Tom Jenkins Dam at about 1700 UTC and quickly deployed his 28½' wire vertical on his 31' Jackite pole that was held upright by a drive-on base. Having already recorded at the earlier visit to Burr Oak State Park (link) the lowest temperature he was likely to see, Eric chose to operate inside his car and he set up his KX3 on the mobile mount on the car's dashboard. Eric was on the air at 1713 UTC. 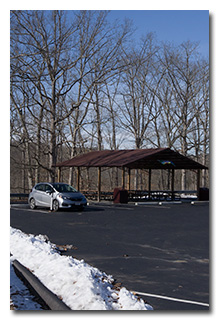 Eric began operations by checking POTA Spots for possible POTA Park-to-Park (P2P) QSOs and at 1715 UTC he made a P2P QSO on 40m with N5BO who was performing a POTA activation of Tuskegee Airmen National Historic Site (K-0868) in Alabama.

Switching to 80m and finding his own frequency there, Eric's first QSO there came at 1720 UTC with his friend K8RAT in central Ohio. This was followed at 1725 UTC with a QSO with W4SK in Tennessee.

In all, Eric made thirty-one QSOs, including six P2P QSOs. 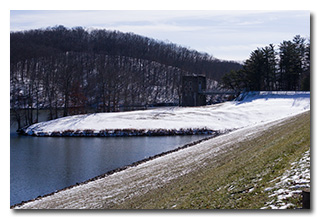 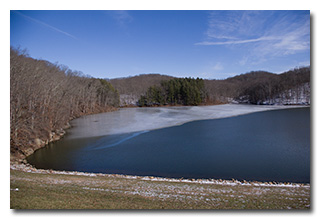