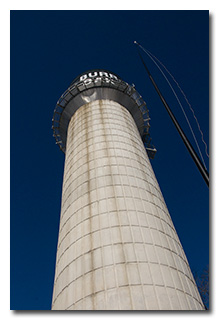 One member of the Southeast Ohio Radio Adventure Team succeeded in performing a valid activation of Strouds Run State Park, K-1994, in Ohio as part of the the Parks on the Air (POTA; link) program while simultaneously participating in the Arizona ScQRPion's annual Freeze Your B___ Off (FYBO) field event. On February 6, 2021, Eric McFadden, WD8RIF, visited Burr Oak State Park on a cold but sunny winter morning. Eric participated in FYBO in the Single-Op, Field category.

Eric arrived at the Burr Oak State Park water tower at about 1530 UTC and quickly deployed his 28½' wire vertical on his 31' Jackite pole that was held upright by a drive-on base. Wishing to record a really low temperature-at-the-key, Eric chose to operate outside and set up his Elecraft KX3 on his folding camp chair. Eric was on the air at 1545 UTC.

Eric began operations on 80m and was rewarded with a POTA Park-to-Park (P2P) QSO at 1547 UTC with his friend K4SWL who with his daughter, K4TLI, and hiked to the mountains to perform a two-fer activation of Pisgah National Forest (K-4510) and Pisgah WRC State Game Land (K-6937) in western North Carolina. 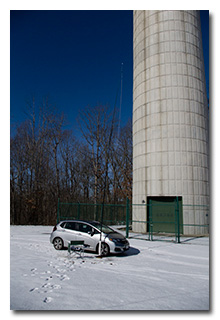 Switching to 40m, Eric's plan has been to concentrate on making FYBO QSOs and his first such contact came at 1552 UTC with N5GW in Mississippi who reported a temperature of 65°. However, once Eric had been spotted on the POTA Spots website, just about only POTA Hunters responded to his calls of "CQ FYBO CQ POTA". QSOs on 40m came quickly, with Eric's twenty-second QSO there coming at 1619 UTC with K0LAF. This run of QSOs included a P2P QSO at 1617 UTC with WD5GRW who was performing an activation of Cedar Hill State Park (K-2996) in Texas. This run also included a QSO with KK4RF who was running a Heathkit HW-16— a couple of weeks earlier, he and Eric had exchanged emails about warbly-receive on the HW-16 and Marty had since been tweaking his HW-16 to try to reduce the warble.

In all, Eric made twenty-three QSOs, including five P2P QSOs. The lowest temperature recorded by Eric was 32°, which provided him a x4 FYBO scores-multiplier.