In the midst of some of Ohio's most rugged, scenic territory of Jackson and Vinton Counties lies 292-acre Lake Alma State Park. A quiet 60-acre lake and a gentle creek meandering through a wooded valley provide a restful setting for park visitors. 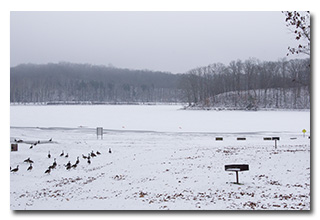 Two members of the Southeast Ohio Radio Adventure Team succeeded in performing valid activations of Lake Alma State Park, K-1967, in Ohio as part of the the Parks on the Air (POTA; link) program while simultaneously participating in the Arizona ScQRPion's annual Freeze Your B___ Off (FYBO) field event. On February 2, 2019, Josh Cash, KE8EAS, and Eric McFadden, WD8RIF, visited Lake Alma State Park on a very foggy but warming winter morning following several days of "Polar Vortex"-generated below normal, frigid temperatures. Josh and Eric each participated in FYBO in the Single-Op, Field category.

The pair drove separately from Athens to the park so that each would have a car to escape too should the temperatures prove to be unsafe or simply too uncomfortable. Josh arrived first and took the time to drive the circle-road around the lake to scout out a location, ultimately choosing to set up and operate in the gazebo on the eastern shore of the small lake. Upon his arrival, Eric chose to set up in the picnic area on the western shore of the lake in order to achieve about 2,000' of separation between the two stations. The pair were independently ready to operate a few minutes before 1500 UTC. 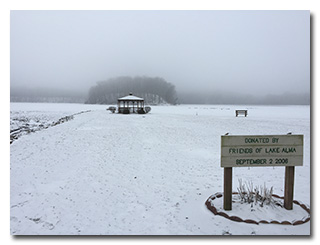 Josh's station consisted of his FX-9A transceiver and his N2CX-inspired 20/30/40m field vertical supported by a 20' fiberglass mast. Eric's station consisted of his Enhanced KX3 Travel Kit and a 42' W3EDP-Jr end-fed zepp supported as a sloper between his MFJ 33' fiberglass mast and his operating chair, the W3EDP-Jr being fed through a homebrew 4:1 unun (link).

QSOs were initially slow in coming but QSOs became easier as the morning progressed. In order to get credit for working K-1967 and for park-to-park QSO credit, Josh and Eric worked each other on both 20m and 40m. 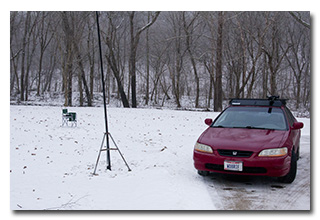 Neither Josh nor Eric had to escape to the warmth of the car during the operation but each decided to call the operation to a successful conclusion after sitting outdoors in the cold for about ninety minutes. Josh finished the event with fourteen QSOs, five of which were with FYBO participants. Eric finished the event with twelve QSOs, seven of which were with FYBO participants and one of which was a park-to-park QSO with N2CX who was performing a string of east-coast activations on FYBO Saturday.

Eric also submitted his log to the World Wide Flora and Fauna in Amateur Radio (WWFF; link) program although his twelve QSOs were not sufficient to achieve a valid activation within the program which requires 44 QSOs be made.

All of Josh's and Eric's QSOs were made at the 5-watt level.