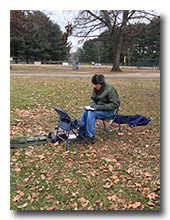 One member of the Southeast Ohio Radio Adventure Team participated in the 2017 Freeze Your B___ Off, an operating event sponsored by the Arizona ScQRPions. Eric McFadden, WD8RIF, operated the event at West State Street Park in Athens, Ohio. Eric was joined by SEORAT-member John McCutcheon, N8WXO, and potential SEORAT-member Josh Cash, KE8EAS.

Eric and John arrived separately at the park a few minutes after 1700 UTC. John wasn't able to stay and participate in FYBO but did stay long enough to watch Eric begin his station setup. Josh arrived just as Eric was finishing his setup and promptly began his station setup.

Eric's station was, as usual, his Enhanced KX3 Travel Kit, but for his event he chose to use a new ½-size W3EDP end-fed antenna instead of his proven 28-½' end-fed wire with three radials. Eric erected his old MFJ-1910 fiberglass mast and pulled the ½-size W3EPD up as a vertical. The 42-½' length of the reduced-size W3EDP required Eric to locate his station about 20' from the base of the mast in order to keep the antenna's twinlead feedline off of the ground. 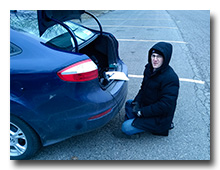 Josh's station consisted of his Kenwood TS-480SAT running 5w on battery power and a multi-band QSO King 59' end-fed wire antenna supported on a Spiderbeam 40' telescopting fiberglass mast. Josh cleverly used his shorter BuddiPole tripod and mast to keep the lower end of his antenna off of the ground, arranging his antenna as an "L".

Both Eric and Josh operated CW, taking turns on 20m and 40m.

Fortunately, FYBO now allows contacts with any other station to count. This rule allowed Eric and Josh to make QSOs with stations participating in a FISTS event, in the Minnesota QSO Party, and in the British Columbis QSO Party. Eric made a total of six QSOs; Josh made a total of seven QSOs.

Eric and Josh were able to operate for about forty minutes before painfully-cold fingers forced them to QRT and tear down their stations. Eric's final log entry was at 1822 UTC.

Eric had chosen to deploy the ½-size W3EDP antenna in order to do his first tests of the antenna. Eric found that the KXAT3 antenna tuner inside his KX3 could easily match the antenna on 10m, 12m, 15m, 17m, 20m, 30m, and 40m. Disappointingly, the KXAT3 could not find a match on 80m. Eric would have liked to also deploy his proven 28-½' end-fed wire and do back-to-back testing of received signal strengths but the temperature was just too low to allow that. Eric had hoped the ½-size W3EDP could be matched on 80m but will continue testing. (Perhaps a 4:1 or 9:1 unun or instead of a 4:1 balun would allow a match on 80m.)