One member of the Southeast Ohio Radio Adventure Team participated in the 2017 Freeze Your B___ Off, an operating event sponsored by the Arizona ScQRPions. Eric McFadden, WD8RIF, operated the event at West State Street Park in Athens, Ohio following the the Ohio University vs. Akron State basketball game. 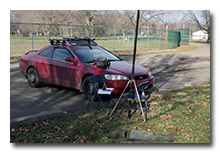 Family plans (i.e., the aforementioned basketball game) prevented Eric from participating in the FYBO event during the coldest part of the day. At the time of the start of FYBO, the outside temperature in Athens was around 18°F. By the time Eric was able to get to the park and set up his station, the temperature had climbed well into the 30s.

Eric's station was the station he had proven through a year of National Parks on the Air (NPOTA) activations, his Enhanced KX3 Travel Kit, a custom clipboard, and two folding chairs.

Eric arrived at West State Street Park about 1935 UTC and quickly erected his fiberglass, deployed his 28½' end-fed wire and three counterpoise wires, and set up his KX3 on one of the two folding chairs. 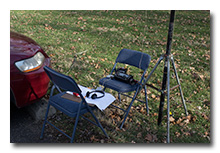 Eric found few FYBO stations on 20m and, choosing a frequency near the QRP calling frequency, started calling "CQ" and made six FYBO stations within about twenty minutes. His first QSO was with KB5FCF at 1959 UTC and his final QSO on 20m was with NE5DL at 2019. Eric switched to 40m but found only stations participating in the FOC Marathon below, directly on, and above the 40m QRP calling frequency. He found no stations participating in FYBO on 40m and his calls of "CQ" went unanswered. Because the cold was starting to cause pain in his fingers, Eric quit with the six 20m QSOs and quickly tore down his station. The lowest temperature Eric recorded for a QSO was 34°F.

Eric was pleased that at least four of the six station he worked were stations he had worked during the year-long NPOTA event in 2016.