One member of the Southeast Ohio Radio Adventure Team participated in the 2015 Freeze Your B___ Off, an operating event sponsored by the Arizona ScQRPions. Eric McFadden, WD8RIF, operated the event at West State Street Park in Athens, Ohio. Eric was joined by his son Miles, KD8KNC, just in time to help tear down in order to attend the Ohio University vs. Eastern Michigan University basketball game. 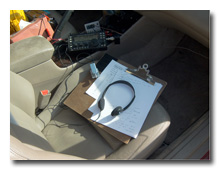 After weeks of frigid, arctic temperatures Eric wasn't in the mood to erect a tent and operate FYBO. Instead, he chose to sit in his car and operate the event. He had planned to start the event with the windows open in order to earn a good low-temperature multiplier and then close the windows--and perhaps start the car and run the heater--in order to prevent getting too cold. Ironically, by the time had finished setup, the outside temperature was quite comfortable and it eventually reached 55°F. The lowest temperature Eric recorded at the key was 58°F.

Eric arrived at West State Street Park about 11:30am and quickly erected his fiberglass mast and 44' broadside doublet as an inverted-vee. Eric had planned to use his 33' MFJ-1910 fiberglass mast but had mistakenly grabbed a 20' Black Widow pole so his antenna was about 10' lower than he had intended.

Eric set up his KX3 on the center console of the 2000 Honda Accord Coupe and he sat in the front passenger seat. The American Morse Equipment Mini-B was attached to Eric's oversized road-rally clipboard using 3M DUal Lock fastener material. The KX3 was powered by a 2.2Ah gel-cell and Eric had a 10-cell Eneloop pack as back-up which wasn't needed.

Eric found 20m around the QRP calling frequency to be very busy. Unfortunately, the activity wasn't all FYBO or, indeed, QRP activity. FYBO participants had to compete with stations running in the YL QSO Party, the Vermont QSO Party, the Minnesota QSO Party, the SKCC Weekend Sprintathon, and what sounded like a FISTS event, all seemingly centered on 14.060MHz. Nevertheless, Eric made a total of nine QSOs on 20m and three on 15m. All QSOs but one were with FYBO participants. The one non-FYBO station was N0EVH activating a SOTA summit; if John sent Eric a temperature, Eric didn't copy it. One of the 15m QSOs was with NQ7RP, good for a 100-point bonus. Eric worked two stations on both 20 and 15m. Eric made his last QSO at 1803 UTC.