Two members of the Southeast Ohio Radio Adventure Team and a guest participated in the 2014 Freeze Your B___ Off, an operating event sponsored by the Arizona ScQRPions. Eric McFadden, WD8RIF; Miles McFadden, KD8KNC; and soon-to-be-licensed Tim Creamer operated the event in Tim's Aliner camper parked on Tim's driveway. Neither Miles nor Tim operated the radio.

The forecast for this day was partly cloudy with temperatures rising from about 35° to about 60°; this high temperature was a welcome change from over a week of temps remaining below freezing. 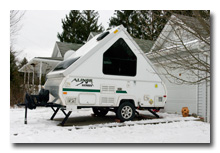 Eric and Miles arrived at Tim's QTH about 9:45AM to find the Aliner camper already set up and ready for the installation of the radio equipment. Unfortunately, Tim had turned on the camper's electric heater and the camper was a comfy 70°; upon discovering this, Eric left the camper door open in an attempt to earn a low-temp multiplier.

Eric and Miles quickly erected the MFJ-1910 33' fiberglass mast and used it to support the center of Eric's W3EDP antenna at 30'.

This event was to be Eric's first use of his Elecraft KX3 in a field operation. Eric set up his KX3 on the camper's small table, using the KX3 Travel Kit's 10-cell Eneloop battery-pack and Whiterook MK-33 Mini Single Lever Paddle. Eric configured the KX3 to continuously display the power-supply voltage so he could track the Eneloop battery-pack's performance.

This being the first time Eric had used the KX3 with the W3EDP antenna, he quickly verified that the KX3's internal antenna tuner could match the W3EDP on all bands without a 4:1 balun. However, he found that KXAT3 could find a better match, and more quickly, on some bands with the 4:1 balun so this was the configuration Eric kept for the contest.

By the time the station was ready for operation, the interior of the camper had dropped to 49°. Eric's first QSO was at 1537Z and the temperature for this QSO was the lowest recorded. As the afternoon progressed, the temperature inside the trailer rose to almost 60°.

Because of the very slow progress of making QSOs, and because of the sunny 60° day that begged to be enjoyed on a bicycle, Eric tore down the station about 1800Z. By the end of the operation, the Eneloop battery-pack was measuring 12v during receive.