Two members of the Southeast Ohio Radio Adventure Team operated the 2012 Freeze Your B___ Off, an operating event sponsored by the Arizona ScQRPions. Eric McFadden, WD8RIF, and Pete Wickman, KD8MZA, operated the event outdoors from a tent on the grounds of the Athens Public Library in Athens, Ohio, and were joined by Eric's son, Miles, KD8KNC. Drew McDaniel, W8MHV, had planned to participate but was kept away by other obligations. 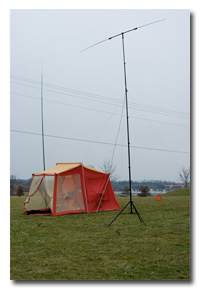 As he did for last year's event, Eric chose to operate FYBO from the library because he hoped members of the Athens County Amateur Radio Association and members of the public would visit. Eric and Miles arrived on-site about 10:30am in an attempt to beat the heaviest of the expected sleet/rain and erected the tent, erected the W6MMA vertical, and suspended the 44' broadside doublet from the MFJ 33' mast, finishing about 11:30am. Pete arrived at about that time and quickly erected his Buddipole mast and dipole. The timing was good--soon after operations commenced, sleet and rain began falling in earnest.

Eric set up his K2 Travel Kit inside the tent and verified the LDG Z11 QRP autotuner could get a good match on the 44' broadside doublet on 15, 20, 40, and 80m. Eric used a pair of Whiterook mini-keys to key the rig. A Whiterook MK-44 Pocket Mini Iambic Paddle (photo) was used to program the K2's memory keyer but a Whiterook MK-22 Pocket Mini CW Key (photo) was used for all the QSOs. (The K2 memory keyer ended up being used only for calling CQ.) The MK-22 Pocket Mini CW Key turned out to have a very nice feel and was easy to use with gloved fingers; Eric was quite happy with its performance. Eric powered his station with an 8Ah gel cell.

As has become standard for FYBO, Eric wore gloves--thin to allow use of the paddle and straight key--with chemical hand-warmers inside the gloves. These items, plus long-johns, wool socks, and insulated boots kept Eric fairly comfortable during the event.

Pete set up his Yaesu FT-450D inside the tent and turned it down to QRP level. Eric had brought an 18Ah gel cell for Pete to use with this "big rig" but this battery quickly discharged and Pete had to drive to his home to get a similar but properly charged battery. (Eric's initial thought was that his home QTH's battery back-up system has failed but determined later that the system is healthy; the 18Ah cell probably had become disconnected some time previously from the system and had discharged over time.)

As indicated above, soon after the tent and antennas were set up, sleet followed by rain began falling. Fortunately, unlike last year, winds weren't a problem, and the sleet and rain quit before it was time to tear down the stations. While the outside temperature remained close to 40&#176F, the measured temperature in the tent rose slowly throughout the afternoon to an indicated 53&#176F before the tent windows were opened in an unsuccessful attempt to lower the temperature at the key to below 40&#176F in order to earn the x4 temperature multiplier. </P> <P class="content"> Eric's first QSO of the event was with Don, K3RLL in FL on 20m. Don was running 3w and was portable but was actually participating in the Polar Bear QRP Ops Group (<A HREF=http://groups.yahoo.com/group/PolarBearQRP_Ops/>link</A>) monthly sprint; fortunately, the Polar Bear exchange contained the same items as the FYBO exchange, or Don knew what information was needed for this to be a valid FYBO QSO. Over the next five hours Eric made a total of 15 QSOs on 20m and 3 QSOs on 40m. Three of these QSOs were with stations not participating in the contest but Eric was able to get all the required information for these QSOs to count. (And one of these QSOs turned into a memorable rag chew with N5XE who used two bugs for the QSO: a 100th Anniversary Vibroplex Original Deluxe and a Blue Racer.) </P> <P class="content"> For Eric, 20m was far more productive than 40m, in part because in the afternoon the 40m QRP calling frequency of 7.030MHz was taken over by QRO stations operating in a First Class Operators Club (FOC) contest and thereafter few FYBO signals were heard. </P> <P class="content"> Pete tried like a champion to make QRP SSB QSOs with FYBO stations as well as with stations participating in the concurrent Delaware, Vermont, Minnesota, and British Columbia QSO Parties and the Black Sea Cup International Contest but failed to make any QSOs. Very few FYBO SSBs were heard and Pete's QRP signal just didn't seem to be strong enough to be heard through the QRO signals working the other contests. <P> <P class="content"> Pete decided to tear down about 4:45pm. At this point, the tent windows were opened in an attempt to earn the lower temperature bonus. The temperature at the key did begin falling rapidly but, unfortunately, Eric's battery failed before the temperate dropped below 40&#176F. Eric's last QSO at 5:19pm was at a recorded temperature of 44&#176F, the lowest temperature at the key Eric saw. </P> <P class="content"> Eric's idea to operate at the library was a good one; the team was visited by twenty guests. Many of these were young people and their parents visiting the library; several of these left with ARRL literature. </P> <P class="content"> <U>Stations Worked by WD8RIF</U><BR> 40m CW: WA5GIR, K3HZP/9, NK8Q<BR> 20m CW: K3RLL, N5XE, W5MSQ, K0ZK, KC0MTC, N4BP, WA5TCZ, W1PID, KA1UUM, K7TQ, N5JKY, N5GW, WA8ZBT, NE5DX, WA5BDU<BR> </P> <P class="content"> Eric calculated his final score to be 2,808 points. </P> <P class="content"> (<A HREF="#" onClick="history.go(-1)">return</A>) </P> <HR> <DIV><script language="JavaScript" src="copyright.js"></script></DIV> </DIV> </BODY> </HTML>