Two members of the Southeast Ohio Radio Adventure Team operated the 2011 Freeze Your B___ Off, an operating event sponsored by the Arizona ScQRPions. Eric McFadden, WD8RIF, operated the event outdoors from a tent on the grounds of the Athens Public Library in Athens, Ohio, and was joined by his son, Miles, KD8KNC. Mike Hansgen, K8RAT, operated the event indoors at QTH K8RAT near Galion, Ohio. 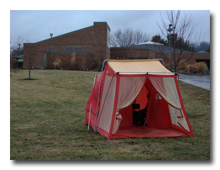 Eric chose to operate FYBO from the library because he hoped members of the Athens County Amateur Radio Association would visit and/or participate. Eric, with the help of his wife Vickie, KC8MAJ, erected the tent and suspended the 88' broadside doublet from the MFJ 33' mast, finishing about 1pm. At that time, the weather was nice enough that Eric had to remove a layer of clothing because he had gotten too warm. (Two members of the ACARA did visit the station during Eric's operation.)

Eric set up his K2 Travel Kit inside the tent and verified a good match on 20 and 40m. The antenna, unchanged from last year, still wouldn't do better than about 2:1 on 80m. Eric did most of his keying with the older of his Speed-X straight-keys.

As at last year's event, Eric wore woven gloves--thin to allow use of the iambic paddle and straight key--with chemical hand-warmers inside the gloves. These items, plus long-johns, wool socks, and insulated boots kept Eric fairly comfortable during the event.

Although the day started out fairly nice, as the afternoon progressed, the temperatures dropped slowly, winds increased dramatically, and the sky alternated between drizzling and spitting sleet. The winds were so strong that the 33' MFJ mast was blown down twice before operations were halted just before 5pm local time.

Eric's first QSO of the event was with N4BP in Florida, on 20m. This was followed over the next fifty minutes by only two more QSOs on 20m, also with operators in Florida. In fact, throughout the afternoon, Eric neither heard nor worked any station on 20m who wasn't in Florida.

40m began to be productive for Eric about 3:30 local time and Eric worked five stations on that band. Stations worked were in FL, NJ, PA, OH, and NC. If the wind hadn't been so fierce, Eric would have liked to have stayed to work more stations on 40m. It should be noted that all but one of Eric's 40 meter QSOs were made near the "old" QRP frequency of 7.040MHz. The "new" frequency of 7.030MHz was jam-packed with QRO stations operating two state QSO Parties and a First Class Operators Club (FOC) contest; this made finding and working FYBO stations challenging.