Two members of the Southeast Ohio Radio Adventure Team operated the 2010 Freeze Your B___ Off, an operating event sponsored by the Arizona ScQRPions. Eric McFadden, WD8RIF, operated the event outdoors from a tent at QTH WD8RIF near Athens, Ohio. Mike Hansgen, K8RAT, operated the event indoors at QTH K8RAT near Galion, Ohio. A third member, Drew McDaniel, W8MHV, had planned to operate FYBO with WD8RIF using his recently-acquired Hendricks QRP PFR3 transceiver but was unable to travel due to the weather conditions.

Following forecasts of significant snowfall to occur the Friday before the event, Eric and his son, Miles (KD8KNC), erected their ancient field-operations tent Thursday afternoon prior to the event so that they wouldn't need to erect the tent during the snowfall or on top of significant snow-depth. 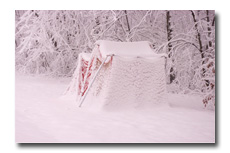 Saturday morning found the tent groaning under a massive amount of snow so the first thing Eric did (after snapping some photos: 1 | 2) was to remove the snow from the tent to prevent it from being damaged. With Miles' help, Eric erected the 33' MFJ-1910 fiberglass mast and the 88' broadside doublet. This is the first time Eric had used either the 33' MFJ mast or the 88' doublet and he was pleased at how easy the mast was to erect using the TV-mast rooftop-tripod he had modified for this purpose and at how well the mast supported the doublet. With the center of the doublet supported at the top of the second-from-the-top section of the mast, there was only insignificant bowing of the mast. (See photos in Field-Deployable Antennas to see how Eric's 20' Black Widow pole bends under the weight of his lighter 44' doublet.)

After setting up his K2 Travel Kit inside the tent, Eric checked to see how well the LDG Z-11 autotuner matched the 88' doublet on 80m, 40m, and 20m. Unfortunately, the best the Z-11 could do on 80m was a match of about 2.5:1 although it achieved 1:1 on both 40m and 20m. This disappointed Eric because he had built this antenna specifically to improve performance on 80m over that of his 44' doublet.

Because Eric's fingers have become quite sensitive to cold the past few years, Eric wore woven gloves--thin to allow use of the iambic paddle and straight key--with chemical hand-warmers inside the gloves. These items, plus long-johns, wool socks, insulated boots, and occasional trips indoors to warm up, kept Eric fairly comfortable during the event.

Because of other evening obligations and a desire to drop the antenna and take the K2 Travel Kit indoors before darkness fell, Eric stopped operating just before 5pm local time.