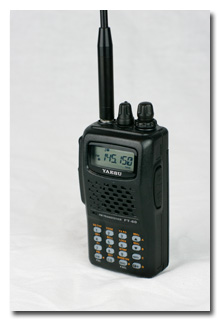 The FT-60R/E's small size allows you to take it anywhere--hiking, skiing, or while walking around town -- and it's operating flexibility brings the user many avenues of operating enjoyment. Its incredibly tiny FNB-83 Rechargeable Nickel-Metal Hydride Battery Pack provides up to 5 Watts of transmit power on 144 MHz and 430 MHz Amateur Bands. Besides 144- and 430MHz transceive operation, the FT-60R/E provides receive coverage of the VHF and UHF TV bands, the VHF AM aircraft band, and a wide range of commercial and public safety frequencies!

New and exciting features of the FT-60R/E are the Emergency Automatic ID (EAI) function, that will automatically cause your FT-60R/E to transmit your callsign and engage your rig's microphone, even if you are disabled and unable to press the PTT switch; Enhanced Paging and Code Squelch (EPCS), that allows you to page a particular station and only receive calls from that station, if desired; and a security Password feature, that will allow you to turn on and operate your transceiver only after you enter your Password.

Additional features include a convenient access key for Yaesu's WiRES™ (Wide-coverage Internet Repeater Enhancement System), a transmit Time-Out Timer (TOT), Automatic Power-Off (APO), Automatic Repeater Shift (ARS), Yaesu's exclusive ARTS™ (Auto-Range Transponder System) which "beeps" the user when you move out of communications range with another ARTS™ equippled station, plus provision for reduction of the TX deviation in areas of high channel congestion. And an RF squelch circuit allows the owner to set the squelch to open at a programmable setting of the S-Meter, thus reducing guesswork in setting the squelch threshold.

I chose the FT-60R over competing models to replace my aging ICOM HTs because the FT-60R has a dedicated volume control, offers AM-mode reception of civil aviation frequencies, is rugged, and is relatively inexpensive. I now have a trio of Yaesu FT-60R HTs although only two of them are functional.

FT-60R #1, serial number 2N592063, was purchased new at the 2013 Dayton Hamvention. A Yaesu MH-34 speaker-mic, a Yaesu FBA-25 AA-cell battery holder, and a Diamond SRH77CA dual-band whip antenna were purchased at the same time. Unfortunately, on August 10, 2014 this FT-60R was run over by the family's 2007 Honda Odyssey; the Odyssey suffered no damage but the FT-60R wasn't so lucky (photos: 1 | 2 | 3). I had hoped this FT-60R was repairable but upon opening the case I discovered the main circuit board was damaged, making a repair un-economical—FT-60R #1 will remain on the shelf as a parts-radio.

UPDATE: On 2022-07-24 I swapped my parts-rig FT-60R's rubber keypad and belt-clip screws onto my FT-60R #3, the HT's original rubber keypad's notations having been rubbed off and the belt-clip screws having become corroded. I pulled the daughter-board containing the volume/squelch pots and the rotary encoder off of the main PCB and I will be sending the main PCB to KJ6ACE, who needs to replace the PTT button in his FT-60R.

For work "on the fringe", I have an SMA-equipped MFJ-1714S Telescopic 2-Meter "Long Ranger" 1/2λ extendable whip for 2m-only operation.

Currently, I have a pair of FNB-83 1400mAh NiMH battery packs, an FNB-V94 1800mAh NiMH battery pack, a Maha MH-FNB-83 2000mAh NiMH battery pack, and two FBA-25 AA-cell holders to use with the FT-60R HTs. Upon the purchase of FT-60R #1, I had initially planned to purchase a Batteries America (link) FNB-83xe eneloop battery pack and EMS-57-83 Desktop Rapid Charger. However, I instead bought two sets of six Sanya/Panasonic Eneloop 1900mAh AA-cells for use with the FBA-25 AA-cell holders. Because the FBA-25 lacks any sort of current-limitation device, fuse, or circuit-breaker, I carry each of the FBA-25s with installed Eneloops in a strong plastic bag so there's no possibility of a short-circuit during storage or transport.

After I acquired FT-60R #2, I purchased the Yaesu / RT Systems (link) ADMS-1J Advanced Data Management System for the FT-60 software and cable so I could pull the programming data from damaged FT-60R #1 and load it onto FT-60R #2. Even though the display on the damaged HT no longer functioned, it was a simple matter to download FT-60R #1's set up to a PC and then to upload it to FT-60R #2.

Using the ADMS-1J Advanced Data Management System for the FT-60 software and cable, I have programmed my FT-60R with local 2m and 70cm repeater frequencies; locally-used 2m and 70cm simplex frequencies; frequencies for the ISS and FM satellites (including compensation for doppler-shift); air-to-ground, VHF Guard, UHF Guard, and UHF ELT frequencies for civil aviation; and the complete set of AAR railroad channels and end-of-train device frequencies. The ADMS software and cable allow me to easily keep my three FT-60R HTs (and my son's) programmed as updates are needed. 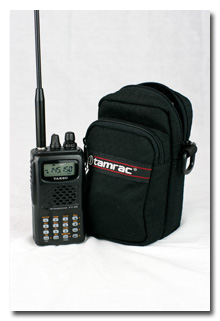 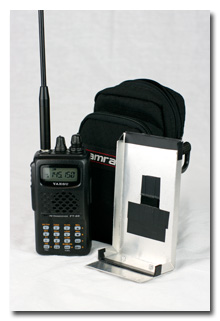 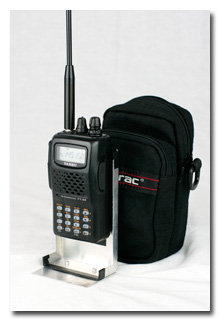 After just over a year of ownership of the FT-60R I have been well satisfied with the radio. The only real issue I've encountered is that the speaker-mic jack on the side of radio seems to be very poorly designed—it takes only the slightest tension on the speaker-mic cord to pull the jack partially out of the socket and lock the transmitter in transmit. I am still trying to work out a solution to this problem, particularly for those occasions when I use my FT-60R in bicycle-mobile service.

FT-60R #1 returned to Yaesu for warranty-service a bit more than a year after I purchased it. I had purchased the FT-60R at the Dayton Hamvention in 2013 and, at that event, I had had the unit tested for spurious emissions at the ARRL booth where it passed with flying colors on both bands. I had the unit tested again almost exactly a year later at the 2014 Dayton Hamvention where the unit failed the 2-meter test. Yaesu realigned the unit under warranty quickly and without complaint.

Photos of the FT-60R Internals—What does the FT-60R look like inside? I opened up my damaged FT-60R #1 and found out.