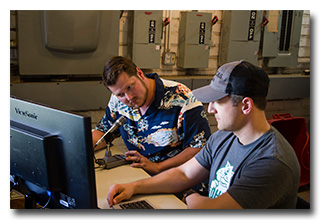 The Athens County Amateur Radio Association (ACARA) participated in the 2019 ARRL Field Day as W8MHV with 100-watt stations at the Athens County Fairgrounds. For the fourth year running, the group was able to set up the stations inside the large brick building on the Fairgrounds for protection from weather and insects.

The club participated in class 1A, meaning one transmitter, club or non-club group, power output of 150 watts or less. A total of 631 QSOs and 1,170 bonus points resulted in a score of 2,766 points. A breakdown of QSOs per band can be found below. The ACARA earned bonus points for the following: 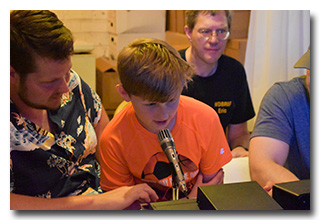 Both the HF station and the VHF station were set up in the large brick building at the Fairgrounds. The HF station consisted of an Elecraft K3 recently purchased by the ACARA for the Jim Crouse Memorial Radio Station which is located at the Red Cross of Southeastern Ohio. An Elecraft KX3 and a solar-charged battery provided by Eric McFadden, WD8RIF, was used to make the first five HF QSOs to earn the Natural Power Bonus. A dual-yardarm atop the 50' trailer-mounted tower supported an 80m/40m fan dipole and a 10m/15m/20m/40m trap-dipole as inverted-vees. The 80m legs of the fan-dipole were oriented north-to-south to provide east-west directivity and the 40m legs were oriented east-to-west to provide north-south directivity. The trap-dipole legs were oriented north-to-south orientation to provide east-west directivity.

The VHF station consisted of an ICOM IC-7410, a homebrew two-element 6m yagi, and a homebrew 20' mast, all of which were provided by John McCutcheon, N8XWO. The yagi was aimed using a traditional Armstrong rotor.

Logging for both stations was by laptop PCs running N1MM Logger+. The HF logging PC interfaced with the K3 and KX3 and tracked band and mode changes. For the third year, the HF operators took advantage of N1MM Logger+'s ability to record the operator's identity for post-event analysis. 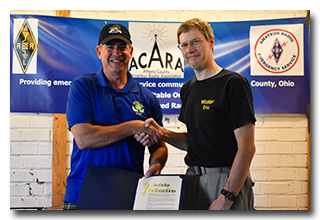 The goal for this year's Field Day was, like that of previous years, to get new or inactive hams on the air and this year that goal was met. Recently-licensed Joe Weber, KE8LRZ, made fifteen QSOs on HF SSB and he helped his son Bobby, age nine, make seven QSOs on HF SSB. Prospective-ham Stephanie Archer, a friend of Andy Young, KD8WVX, made a stunning fifty QSOs on HF SSB, and even worked the 10pm-to-2am shift with Andy.

Old-timers also worked the stations. Miles McFadden, KD8KNC, made twenty-four QSOs on HF SSB. Andy Young, KD8WVX made thirty-eight QSOs on HF SSB. Jeff Slattery, N8SUZ, made two HF SSB QSOs at at the event's end on Sunday. John McCutcheon, N8XWO, made four SSB QSOs on the uncooperative 6m band. Drew McDaniel, W8MHV, made sixty-two HF CW QSOs during the 2am-to-6am graveyard-shift. Eric McFadden, WD8RIF, made 103 HF CW QSOs. The Most Valuable Player of this year's Field Day effort was Josh Cash, KE8EAS, who made a whopping 326 QSOs on HF; of these, 299 were CW.

The Educational Activity this year was to teach newly-licensed and prospective hams the skills needed for success during an HF contest. These skills included operating using proper protocol, verifying a station to be worked wasn't a "dupe", and proper logging of the contact including verification of correct time, date, band, and mode. 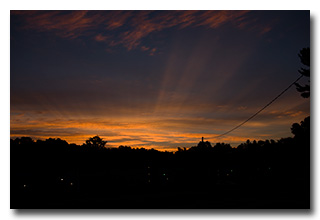 As happened last year, the group failed to make a successful satellite QSO this year, although this was not through lack of trying. WD8RIF, KD8KNC, and KD8WVX attempted to make a QSO during four passes of three FM-satellites using two of WD8RIF's Yaesu FT-60R handheld transceivers and his recently-purchased Arrow II dual-band yagi antenna. The number of stations attempting to work through the single-channel birds was just too high to allow success. As had happended last year, high-profile stations were heard making multiple contacts through several of of the passes even though Field Day rules allow credit for only one QSO through an FM satellite. An example of this was W5RRR, the Johnson Space Center Amateur Radio Club, which, it was later learned, was acting as a "net control" to increase smaller stations' chances of making a QSO during the pass; W5RRR would submit only one FM-satellite QSO for points in their ARRL Field Day Submission and in their AMSAT Satellite Field Day submission.