The Athens County Amateur Radio Association (ACARA) participated in the 2018 ARRL Field Day with 100-watt stations at the Athens County Fairgrounds with the callsign W8PG. For the third year running, the group was able to set up the stations inside the large brick building on the Fairgrounds for protection from weather and insects.

The club participated in class 1A, meaning one transmitter, club or non-club group, power output of 150 watts or less. A total of 561 QSOs and 1,150 bonus points resulted in a score of 2,021 points. A breakdown of QSOs per band can be found below. The ACARA earned bonus points for the following: 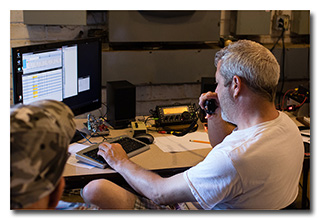 The ACARA Field Day operation took place at the Athens County Fairgrounds. Power for the HF station came from a 2kW Honda inverter-generator and power for the the 6m VHF station came from a 1kW Honda inverter-generator. These generators were not as environmentally-friendly as the solar trailer used during previous Field Day operations but these modern generators are significantly quieter, more fuel-efficient, and more reliable than less sophisticated generators. Athens County 9-1-1 Emergency Communications Center again provided the 50' trailer-mounted tower to support the 80m/40m fan-dipole and 10m/15m/20m/40m trap-dipole HF antennas.

Both the HF station and the VHF station were set up in the large brick building at the Fairgrounds. The HF station consisted of an Elecraft KX3 provided by Eric McFadden, WD8RIF, and a matching Elecraft KXPA100 100-watt amplifier with KXAT100 internal ATU provided by Drew McDaniel, W8MHV. A dual-yardarm atop the 9-1-1 Center's 50' trailer-mounted tower supported an 80m/40m fan dipole and a 10m/15m/20m/40m trap-dipole as inverted-vees. The 80m legs of the fan-dipole were oriented north-to-south to provide east-west directivity and the 40m legs were oriented east-to-west to provide north-south directivity. The trap-dipole legs were oriented north-to-south orientation to provide east-west directivity. 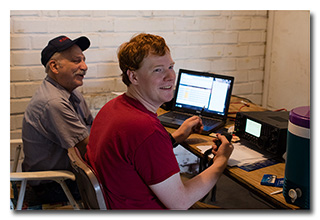 The VHF station consisted of an ICOM IC-7410, a homebrew two-element 6m yagi, and a homebrew 20' mast, all of which were provided by John McCutcheon, N8XWO. The yagi was aimed using a traditional armstrong rotor.

Logging for both stations was by laptop PCs running N1MM Logger+. The HF logging PC interfaced with the KX3 and tracked band and mode changes. For the second year, the HF operators took advantage of N1MM Logger+'s ability to record the operator's identity.

Friday night prior to Field Day had brought rain to Athens and Saturday brought additional rain. Fortunately, during set-up time, the rain stayed away and deployment of the antennas and generators took place without anybody getting seriously wet. (The rain, heavy at times, returned following set-up but, fortunately, the rain wasn't accompanied by lightning.)

Athens Mayor Steve Patterson accepted the invitation by Jeff Slattery, N8SUZ, to visit the Field Day operation. The mayor visited on Saturday and presented a proclamation from the City of Athens. View the proclamation: Amateur Radio Operators Appreciation Days, June 23-24, 20178

As a result of the press releases sent out by Josh Cash, KE8EAS, the Field Day operation was visited by Dennis Powell from The Athens News (link). An article by Mr. Powell was published in the June 28, 2018 edition of the paper: Ham Radio Field Day good fun with a serious purpose.

The goal for this year's Field Day, like that of last year, was to get new or inactive hams on the air but. unfortunately, other plans conspired to prevent the ACARA's newly-licensed hams from being able to participate. In addition, conflicting plans also kept several of the ACARA's most active members from participating in Field Day. Nevertheless, the few operators who were able to participate made 561 QSOs and had fun while doing so. David Bradley, N8DWB, made about eight HF SSB QSOs. Bob Curtis, KD8FRQ, made four HF SSB QSOs. Eric McFadden, WD8RIF, made 310 HF CW QSOs. Miles McFadden, KD8KNC, made about thirty HF SSB QSOs. Jeff Slattery, N8SUZ, made eleven HF SSB QSOs. Andy Young, KD8WVX, made 181 HF SSB QSOs. The 6m station didn't track operators but Bob Curtis, KD8FRQ; John McCutcheon, N8XWO; Miles McFadden, KD8KNC; and Bob Moore, KC8KSM all contributed to making the 6m station's twenty-one 6m SSB QSOs. 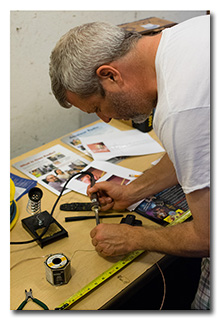 The Educational Activity this year was a presentation by Eric McFadden, WD8RIF, entitled "Improving 2-Meter HT Performance in Pedestrian-Mobile Applications" and included the opportunity for those interested to build a "tiger tail" counterpoise wire for their HTs.

Unfortunately, the group failed to make a successful satellite QSO this year, although this was not through lack of trying. WD8RIF and KD8WVX attempted to make a QSO during six FM-satellite passes using WD8RIF's Yaesu FT-60R and Elk 2M/440L5 dual-band log-periodic antenna. The number of stations attempting to work through the birds was significantly higher than that heard during Field Day 2016 and Field Day 2017, even during the wee-hours-of-the-morning passes. Interestingly, the same strong stations were heard dominating all six of the satellite passes. Initially, WD8RIF thought that these stations were violating Field Day rule 7.3.7.1 ("Stations are limited to one completed QSO on any single channel FM satellite") by making numerous QSOs during the multiple passes but he eventually came to realize that he hadn't heard any of them complete a single QSO; they were probably trying—and failing—to make a QSO just as he and KD8WVX were doing.

It is interesting to note that in 2016, there was just one FM satellite available (SO-50) and the ACARA group easily succeeded in making a QSO; in 2017, there were two FM satellites available (SO-50 and Lilac-Sat) and the group succeeded in making a QSO; in 2018, there were four FM satellites available (SO-50, AO-85, AO-91, and AO-92) yet traffic on the birds during six passes prevented the ACARA from completing a QSO. WD8RIF credits the increased interest in the FM satellites to the article, "Get on the Satellites for ARRL Field Day" by Sean Kutzko, KX9X, which appeared in the June, 2018 edition of QST. It would be interesting to compare this year's number of successful FM satellite QSOs with the numbers for previous years—did KX9X's article increase interest in the FM satellites so much that fewer stations met with success? WD8RIF is hoping that by Field Day 2019, one of the announced HF linear-transponder satellites will be operational.

Eric McFadden sends very special thanks to the Athens County 9-1-1 Emergency Communications Center for the use of their 50' crank-up mobile tower.