The Athens County Amateur Radio Association (ACARA) participated in the 2017 ARRL Field Day with 100-watt stations at the Athens County Fairgrounds with the callsign W8MHV. As for Field Day 2016, the group was able to set up the stations inside the large brick building on the Fairgrounds for protection from weather and insects.

The club participated in class 1A, meaning one transmitter, club or non-club group, power output of 150 watts or less. A total of 837 QSOs and 1,250 bonus points resulted in a score of 4,050 points. A breakdown of QSOs per band can be found below. The ACARA earned bonus points for the following: 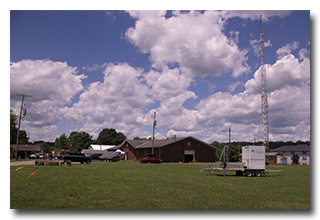 Both the HF station and the VHF station were set up in the large brick building at the Fairgrounds. The HF station consisted of an Elecraft KX3 provided by Eric McFadden, WD8RIF, and a matching Elecraft KXPA100 100-watt amplifier with KXAT100 internal ATU provided by Drew McDaniel, W8MHV. A dual-yardarm atop the 9-1-1 Center's 50' trailer-mounted tower supported an 80m/40m fan dipole and a 10m/15m/20m/40m trap-dipole as inverted-vees; the 80m legs of the fan-dipole were oriented north-to-south to provide east-west directivity and the 40m legs were oriented east-to-west to provide north-south directivity. The trap-dipole legs were oriented north-to-south orientation to provide east-west directivity.

The VHF station consisted of an ICOM IC-7410, a homebrew two-element 6m yagi, and a homebrew 20' mast, all of which were provided by John McCutcheon, N8XWO. The yagi was aimed using a traditional armstrong rotor.

Logging for both stations was by laptop PCs running N1MM Logger+. The HF logging PC interfaced with the KX3 and tracked band and mode changes. For the first time, the HF operators took advantage of N1MM Logger+'s ability to record the operator's identity. This provided some interesting information—see below.

Friday night prior to Field Day had brought rain and storms to Athens. Fortunately, by set-up time, the rain had stopped and the field upon which the antennas were to be erected had begun to dry. However, upon arrival Saturday for set-up, it was quickly discovered that the fairgrounds was without commercial power. It was later learned that the overnight storm had resulted in an AEP pole being struck by lightning, leaving a large portion of the city of Athens was without power. This situation didn't slow the Field Day operation down and, because of the solar power trailer, Field Day QSOs commenced before the commercial power was restored.

Athens Mayor Steve Patterson accepted the invitation by Jeff Slattery, N8SUZ, to visit the Field Day operation. The mayor visited on Saturday and presented a proclamation from the City of Athens. View the proclamation: Amateur Radio Operators Appreciation Days, June 24-25, 2017

As a result of the press releases sent out by WD8RIF, the Field Day operation was visited by two newspaper reporters: Larry Di Giovanni from The Athens Messenger (link) and Dennis Powell from The Athens News (link). Both reporters seemed quite interested and Mr. Powell seemed very well informed about radio and the radio hobby.

The goal for this year's Field Day, like that of last year, was to get new or inactive hams on the air and this goal was resoundingly met. Josh Cash, KE8EAS, who has been licensed only about a year, was the ACARA Field Day Most Valuable Player; in addition to copying the Special ARRL Field Day CW Bulletin and earning the club the 100 bonus points, Josh made 317 HF CW QSOs, 26 HF SSB QSOs, and probably half QSOs made by the 6m station. Robert Riordan, KA4VNK, who has been licensed for many years but had been inactive until discovering the National Parks on the Air event last year, made almost all of the 6m QSOs that Josh didn't. DJ Amireh, KE8BCX, returned this year and provided yeoman service, making 63 HF SSB QSOs. Miles McFadden, KD8KNC, made 22 HF SSB QSOs and later suggested the club should consider switching to class 2A so he would havemore time at the microphone. Andy Young, KD8WVX, who also participated in last year's National Parks on the Air, made 84 HF SSB QSOs. 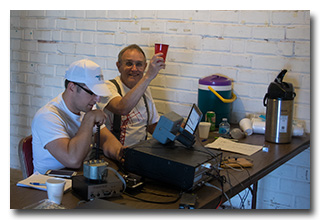 Unlike last year, when the 6m station made only two QSOs, after after a slow start 6m opened like gangbusters with paths to Texas, Florida, and New England. The VHF team made a total of 101 6m QSOs, of which 22 were CW and 79 were SSB.

Eric McFadden sends very special thanks to Erik Peterson and Fern Hollow Farm for the use of the solar power trailer; to Andy Young, KD8WVX, for towing the solar trailer from Somerset to Athens; to Hans Hake, KD8NLI, for returning the trailer to Somerset, and to the Athens County 9-1-1 Emergency Communications Center for the use of their 50' crank-up mobile tower.