I am an avid bicyclist and enjoy combining amateur radio with my cycling. I have built a VHF/UHF FM bicycle-mobile station and I carry my QRP HF station to field events on my bicycle.

I built my bicycle-mobile station in the winter of 2004 in order to be able to ride bicycle-mobile helping the Athens County Amateur Radio Association (ACARA) provide communications support to the 2004 running of the Athens (Ohio) Marathon (link). For the 2004 event, the 2m HT and antenna system were completely successful; I could successfully hit the repeater over the entire 26.2 mile course except for one small space near the far-end of the course.

In addition to the Athens Marathon, I've used my bicycle-mobile station in support of the Athens MS-Walk, Run Like Hell 5K Run for Cystic Fibrosis, and Pelotonia. 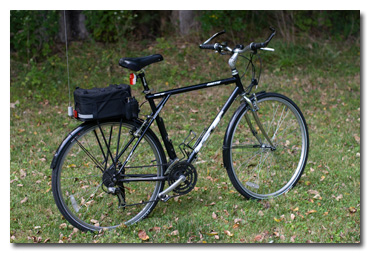 
The Bicycle
(return to top)

The bicycle is a 1997-vintage GT Arette steel-frame 21-speed hybrid. To this bicycle I have added full fenders, a rear rack and bag, a Sigma Sport BC-400 computer, a SpeedV WTB saddle, a Princeton EOS (1-watt Luxeon LED) headlight, a Planet Bike Superflash ½-watt LED taillight, two water bottle cages, handlebar extensions, Shimano SPD clipless pedals, kickstand, and a tire pump. The front wheel and fork have been replaced, the originals having been trashed in an accident. The rear wheel was replaced after I started breaking spokes and again when the bearing destroyed itself. The crank, the sprockets, the chainrings, the chain, and the rear derailleur have all been replaced, after the originals wore out. The bicycle is currently equipped with 22-32-42 chainrings and 7/13-28 cogs.

(Since I upgrade the bicycle on an ongoing basis, the photos on this page may not reflect the current configuration of the bicycle.)

The Radio
(return to top)

The radio is a Yaesu FT-60R 2m/70cm handheld. The HT rides in a a Western Case Company (link) #26 nylon HT case which slips onto a steel bracket bolted to the bicycle's rear-rack (photos: 1 | 2 | 3 | 4). The nylon case securely carries the HT and provides vibration-reduction and some protection to the HT in case of accident. I have found that this location for the radio works well; I can adjust the volume and squelch from the seat while under way. If I need to change frequency, I'll need to stop, dismount, and remove the HT from the nylon case in order to unlock the keypad and tuning knob.

The radio location was carefully chosen to not interfere with mounting of the KX3 Travel Kit, the APRS Tracker in a Pelican Case, or the rear pannier. I would like to eventually replace the steel bracket with a lighter aluminum one. 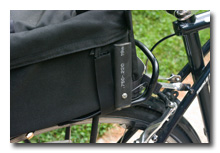 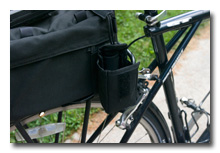 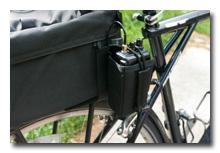 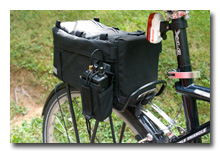 I tried handlebar-mounting of the FT-60R but quickly found it to be unsatisfying—there was just too much mass, both physically and aesthetically, on the handlebars with the HT mounted there, and I didn't like the vibration the HT was subjected to.

The Antenna
(return to top)

The permanent antenna mount is an SMA-equipped MFJ-341SS SO-239 antenna-mount on a steel bracket bolted to the bicycle's rear-rack (photo). The antenna-mount location was carefully chosen so that the mount won't interfere with the mounting of panniers to the rear-rack. 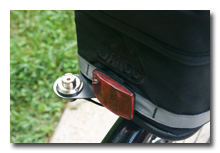 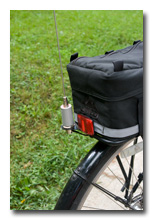 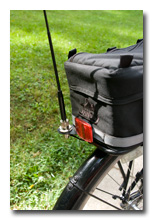 On occasion, particularly when I intend only to listen to the radio while riding and don't want to fuss with the speaker-mic, I ride with the Diamond SRH77CA dual-band HT whip installed directly on the HT instead of mounting an antenna on the bicycle. On these occasions, I install a weather-proof cap on the SO-239 antenna-mount (photo) to keep grit and moisture out of the connector.

UPDATE 2019-04-16: In preparing for the 2019 Athens Marathon, I discovered that this MFJ-341SS in the permanant antenna mount has failed: the center pin of the SMA connector had gotten shoved into the connector body enough that it provided poor or intermittent connection to an HT or APRS tracker. I could pull the pin back out with pliers but the pin got shoved right back in when I connected to a radio. For Marathon 2019. I replaced the MFJ-341SS with an SO-239 bulkhead adapter and used appropriate adapters to connect to my radio.

After initially encountering trouble trying to use a speaker-mic with the FT-60R, I finally found that the MFJ-282Y behind-the-head boom-mic headset (photo) works well with the HT and can be comfortably worn with a helmet. While testing the MFJ-282Y, I received reports of good, strong audio and no wind-noise.

UPDATE: For the 2016 Athens Marathon I finally resolved the issue with the FT-60R speaker-mic jack: I physically removed the rubber grommet from the HT's socket to allow the speaker-mic plug to fit more securely and reliably. A strain-relief of some sort is still needed, however. I have a pair of four-conductor extension cables, one about 6' long and one about 3' long, that hadn't worked reliably before I removed the grommet but both work very reliably now. I wrap one or more turns of the cable around the HT's belt-clip as a strain-relief before securing the HT in the nylon case. During several test-rides and during the entirety of the 2016 Marathon, I experienced no issues whatsoever with this arrangement. For the 2016 Marathon, I used my Yaesu MH-34 speaker-mic attached to a lanyard worn around my neck; the MH-34 produced fine receive audio and I received reports of excellent transmit audio. I have not yet tested the MFJ-282Y headset with the modified HT. (Indeed, I have become dissatisfied with the way the MFJ-282Y fits on my head and may never actually use it.)

UPDATE 2019-04-16: For the 2019 Athens Marathon, I chose to carry the FT-60R on my chest, clipped to a pocket on a reflective safety vest, with the MH-34 speaker-mic connected directly to the HT and clipped to a lanyard. A loop added at the vest's shoulder kept an HT-mounted MFJ-1714S extendable ½-wave antenna vertical as I rode. This arrangement worked well and the FT-60R and mic both seemed to survive the heavy rain that fell during the ride. It was nice to not be tied to the bicycle with a speaker-mic cord.

For support of the Athens Marathon, the MS-Walk, and other events, I carry an Automatic Packet Reporting System (APRS) station on the bicycle in addition to the voice-net radio. An SMA-equipped MFJ-341SS SO-239 antenna-mount is mounted on an aluminum bracket which I temporarily mount on the rear rack of the bicycle adjacent to the permanent antenna-mount (photo). On this mount I can install a Larsen Kūlrod MHW-150 2m 1/2λ ground-independent mobile antenna or a taller, higher-gain Diamond DP-NR2C 2m 6/8λ ground-independent mobile antenna.

I can easily mount either of my APRS trackers to the bicycle. One of the ACARA's Byonics Micro-Trak AIO tracker travels safely bungied to the top of my Jandd Mountaineering (link) rear-rack trunk-box using the trunk-box's clever elastic straps. My larger Earthmate/GST-1/TinyTrak3/IC-2AT APRS Tracker in a Pelican Case safely travels on the same easy-to-mount, easy-to-remove rear-rack fixture I use to transport the KX3 Travel Kit on the bicycle (photos: 1 | 2). 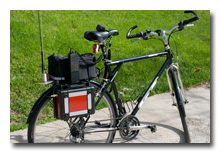 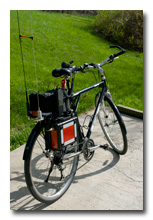 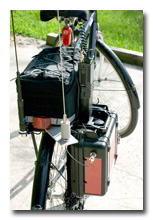 The photos above show the bicycle-mobile configuration used in support of the 2015 Athens Marathon. I used an IC-2AT HT as the voice radio for this event because I hadn't yet solved the FT-60R bicycle-mobile speaker-mic connection problem.

UPDATE 2019-04-16: In preparing for the 2019 Athens Marathon, I discovered that the MJF-341SS APRS antenna mount has failed in a way identical to the failure of the MFJ-341SS voice-radio antenna mount (see above). I removed both MFJ-341SS mounts and the aluminum second bracket from the bicycle, and installed an SO-239 bulkhead adapter in the permanent antenna bracket. Since I was using an HT-mounted antenna for the voice-net radio, I was able to use my permanent antenna mount for the APRS antenna. I carried a second FT-60R in the rear-mounted pouch so I could hear my own packets and be assured that the old APRS tracker continued to function properly.

I don't operate HF while riding the bicycle but I do use my bicycle to transport myself and my HF equipment to HF field operations. 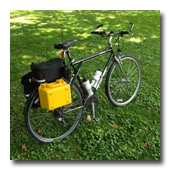 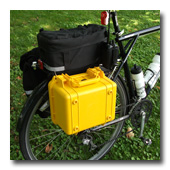 My KX3 Travel Kit was initially carried on the bicycle using the same easy-to-mount, easy-to-remove fixture I had built to transport the smaller and much lighter KX1 Mini Travel Kit. (photos: 1 | 2).

I built a much lighter K1 Travel Kit for bicycle-portable HF operations. I've carried the K1 Travel Kit on the bicycle for a Parks on the Air (POTA) activation of Wayne National Forest (K-4521), and the 2021 Flight of the Bumblees event.

Visit the Bicycle-Mobile Archive Page to see how the QRP Station in a Bag, the K2 Travel Kit, and the KX1 Mini Travel Kit were transported via bicycle.