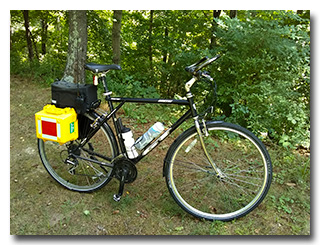 Taking advantage of a great weather forecast, Eric participated in the event by bicycling a hilly fifteen mile (round-trip) route with his KX3 Travel Kit from his home to the cemetery on The Ridges in Athens, Ohio. In addition to the HF station, Eric carried additional sundries and his Yaesu FT-60R dual-band FM handheld on the bicycle. For his part, Josh parked a distance from the cemetery and back-packed his station to the cemetery on a route that included a significant climb up a set of steep wooden stairs.

Eric and Josh arrived at the cemetery about 1645 UTC with the intention of setting up the two stations about 100 yards apart on stone benches under handy trees. However, upon arrival, the pair found that one of the two benches was already occupied and they decided to set up both stations on the single remaining bench and take turns operating their stations.

Eric was able to throw a line in a conveniently-located tree with a single throw of a half-filled water bottle and pulled up his 28-½' wire. At the same time, Josh deployed his N2CX-inspited QRP Guys tri-band vertical using a 20' Black Widow pole as a support. During set-up, fellow SEORAT-member Andy Young, KD8WVX, and his young daughter arrived to watch the goings-on. Andy did not bring a station and did not operate. 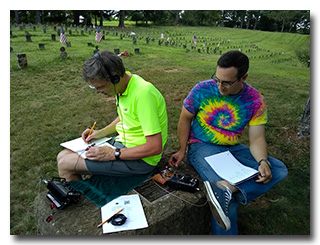 Operations at the cemetery began about 1730 UTC. Extremely poor band conditions caused very weak signals and deep QSB on both 20m and 40m. Eric managed nine QSOs and Josh managed about the same number of QSOs before the pair decided to tear down about 1900 UTC. Eric's QSO tally included three QSOs on 20m and six QSOs on 40m.

Josh's FX-9A transceiver and tri-band wire vertical both worked well for the event and traveled well on Josh's back.

The weather forecast held true and the weather was just about perfect for a human-powered-transport QRP adventure, the high temperature reaching just about 80°. The KX3 Travel Kit traveled well on the new ¼" steel-rod fixture Eric had had made just prior to this event and the climbs on the fully loaded bicycle were slogs but were less difficult than Eric had anticipated. The round-trip mileage was 15 miles and included 860 feet of climb.

The 2018 Flight of the Bumblebees was the first solo field-event Mike was able to participate in in several years. For this event, Mike deployed his recently-acquired Elecraft KX3 and N2CX-inspired QRP Guys tri-band vertical antenna supported by a telescoping pole at the Galion, Ohio city reservoir. Circumstances allowed Mike to operate for only a short time. Mike found the band conditions in Galion to be as bad as Eric and Josh had found them to be in Athens. Mike made one QSO, with KF0UR in CO, before he had to tear down and leave but this one QSO was enough to prove the effectiveness of his KX3 and N2CX-inspired antenna.