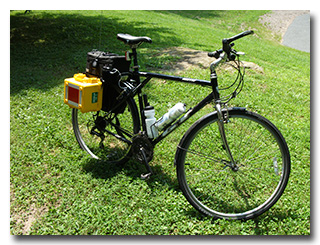 Eric McFadden, WD8RIF, participated in the 2017 Adventure Radio Society Flight of the Bumblebees operating event. Eric bicycled a hilly 10 miles from home to Highland Park in Athens, Ohio where he was met by his wife, Vickie, KC8MAJ. Eric operated as Bumblebee #3.

Taking advantage of a great weather forecast, Eric participated in the 2017 Flight of the Bumblebees, the 20th running of this classic QRP field event, by bicycling with his KX3 Travel Kit to Highland Park in Athens, Ohio. In addition to the HF station, Eric also carried his Yaesu FT-60R dual-band FM handheld on the bicycle.

Eric arrived at the park about 1812 UTC and quickly deployed his station in the unoccupied picnic shelter, supporting his 28½' end-fed wire with a length of dental floss thrown through a conveniently-located oak tree. As expected, the proven wire antenna with three counterpoise wires on the ground was easily matched by the KX3's internal antenna tuner on both 20m and 40m. 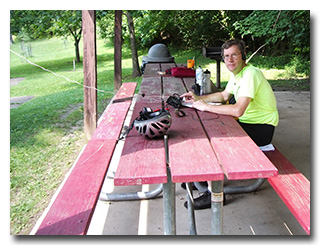 Operations began on 20m with the a QSO with K9DXA at 1835 UTC. Poor band conditions causing weak signals and quick, deep QSB, Eric managed 18 QSOs, one of which was a dupe, before shutting down the station at 2015 UTC. Eric's QSO tally included eleven QSOs on 20m and seven QSOs on 40m.

As expected, the KX3 worked very well for this event. The ten AA-cell battery holder stuffed with Eneloop NiMH cells easily powered the rig for the period Eric operated.

The weather forecast held true and the weather was just about perfect for a human-powered-transport QRP adventure, the high temperature reaching only about 82°. After last year's experience, Eric chose to avoid Madison Avenue in both directions and biked up 2nd Street on his way to Highland Park and descended Columbus Road to the relatively new Columbus Road bikeway extension on his way back home. The climbs on the fully loaded bicycle were slogs but were less difficult than Eric had anticipated. The round-trip mileage was 21 miles with over 1,000 feet of climb.