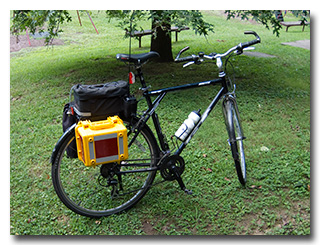 Eric McFadden, WD8RIF, participated in the 2016 Adventure Radio Society Flight of the Bumblebees operating event. Eric bicycled a hilly 5-1/2 miles from home to Highland Park in Athens, Ohio where he was met by Ted Jacobson, W8KVK. Eric operated as Bumblebee #12.

This was Eric's first QRP field operation of 2016 that wasn't associated with the ARRL's National Parks on the Air (NPOTA) program.

Despite a weather forecast for a chance of rain and thunderstorms, Eric decided to participate in the 2016 Flight of the Bumblebees by bicycling with his KX3 Travel Kit to Highland Park in Athens, Ohio. In addition to the HF station, Eric also carried his Yaesu FT-60R dual-band FM handheld on the bicycle.

Eric arrived at the park about 1715 UTC and found Ted already there. While Ted watched, Eric set up his station in the unoccupied picnic shelter and threw a line (of dental floss) through the tree in front of the picnic sheter. Ted helped keep the wire tangle-free and Eric pulled up his 28' end-fed wire. Ted also helped deploy the three radial wires. As expected following numerous NPOTA activations with the same station, the KX3's internal antenna tuner easily matched the 28' end-fed with three radials on both 20m and 40m. 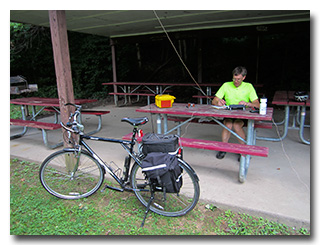 As expected, the KX3 worked very well for this event. The ten AA-cell battery holder stuffed with Eneloop cells easily powered the rig for the period Eric operated and the rig-mounted AME Mini-B paddle was a joy to use.

While many Flight of the Bumblebees participants were heard on both 20m and 40m, signal strengths were weak and QSB was deep and fast. Many stations were heard that completely disappeared before Eric could work them. Other signals were heard who couldn't hear Eric. For some of the QSOs he did make, Eric wasn't able to copy all of the items in the exchange. Of the QRP stations Eric heard, the strongest and most stable signal was KF0UR in Colorado on 20m.

Despite the weather forecast, the weather was just about perfect for a human-powered-transport QRP field event. No rain fell and the high temperature reached only about 83°. Eric did find the climb up Madison with the loaded bicycle prior to the event to be a slog—and the descent of Madison Avenue on the loaded bicycle after the event was almost terrifying because of the roughness of the pavement.