Eric McFadden, WD8RIF, participated in the 2015 Adventure Radio Society Flight of the Bumblebees operating event. Eric bicycled from home to West State Street Park in Athens, Ohio where he was met by his wife Vickie, KC8MAJ. Eric operated as Bumblebee #10. 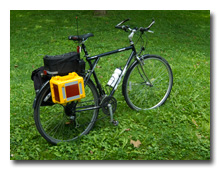 Despite an ongoing solar storm which took the solar "K Index" to 3 and a weather forecast for rain and thunderstorms in the late afternoon, Eric decided to participate in the 2015 Flight of the Bumblebees by bicycling with his KX3 Travel Kit to West State Street Park in Athens, Ohio. Eric also carried some sundries including a second antenna in a pannier and his Yaesu FT-60R dual-band FM handheld.

Arriving at the park about 1645 UTC, Eric quickly erected the KE4PT off-center-fed end-fed dipole and set up the KX3 station in the park's picnic-shelter. The KX3's internal antenna tuner easily matched the KE4PT on both 20m and 40m.

Operations began with the first QSO at 1715 UTC with KX0R in Colorado on 20 meters. However, as signals seemed weak on 20m and nonexistant on 40m, Eric decided to deploy the 28' end-fed wire with two radials in order to compare its performance to that of the KE4PT.

Once the 28' wire was up, it was immediately clear that the 28' end-fed wire did, indeed, hear signals (and band noise) better than the KE4PT did and thereafter all operations occurred using the 28' end-fed wire. Strangely, the KX3's internal tuner had a very tough time matching the 28' end-fed wire on 20m even though in the past—and at the same location—the tuner had had no trouble whatsoever matching this antenna on 20m. (Eric realized after the event was over that possibly the KE4PT hanging in close proximity may have affected the impedence of the 28' wire; further tests will be made.)

Eight QSOs were made on the 20 meter band before Eric moved to 40m where a string of seven QSOs were made in just about eleven minutes with Eric running the frequency. Eric ceased operations just after 1900 UTC because of threatening skies. In all, fourteen QSOs were made. Stations were worked in AL, CO, CT, FL, GA, IA, IL, MN, NC, NJ, NY, PA, and QC. Eric allowed his wife to carry the pannier home in the van but bicycled home carrying the complete KX3 Travel Kit. Eric's round-trip mileage on the bicycle was a hilly 18 miles.

As expected, the KX3 worked very well for this event. The ten AA-cell battery holder stuffed with Eneloop cells easily powered the rig for the almost two hours Eric operated and the AME Mini-B paddle was a joy to use.