One member of the Southeast Ohio Radio Adventure Team participated in the 2013 Adventure Radio Society Flight of the Bumblebees operating event. Eric McFadden, WD8RIF, bicycled from home to West State Street Park in Athens, Ohio and operated as Bumblebee #65. 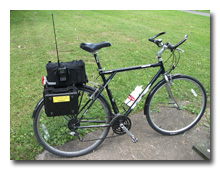 Eric bicycled from his home to West State Street Park for the event, a hilly ride of about 7.5 miles. As for last year's event, Eric carried his KX1 Mini Travel Kit on the bicycle. In addition to the KX1 Mini Travel Kit, Eric carried his 44' doublet, a clipboard, and a Yaesu FT-60R dual-band FM handheld. The small and light-weight station traveled very well on the bicycle.

Eric was hoping to be joined by other Athens-area RATs but none were able to participate this year.

Arriving at the park about 1:45pm, Eric quickly erected the 28' end-fed wire antenna and set up the KX1 station one one of the park's picnic-tables (photo). The 28' wire worked well enough for this event that Eric decided not to hang his 44' doublet. 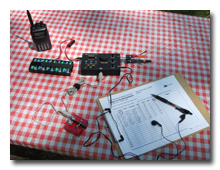 Operations began with the first QSO at 1816 UTC with WV0H in Colorado on 20 meters. A total of thirteen QSOs were made on the 20 meter band before Eric ended operations at 1945 UTC. Stations were worked in AL, AR, CA, CO, CT, FL, GA, MA, ME, NE, NY, and WI. Despite the lingering effects of a CME (A-Index 11, K-Index 2), the 20 meter band was full of signals and it was fairly easy to make contacts.

Eric powered the KX1 with his battery-pack consisting of ten AA NiMH cells that provide about 13vdc. As for previous operations, this pack worked very well and with it the KX1 generated an indicated 2.6W on 20m.

The weather was almost perfect for this sort of event; the high temperature reached only only 75°F and a nice breeze kept Eric cool on the bicycle ride to and from the park.

UPDATE: Flight of the Bumblebees 2013 results are posted here: www.arsqrp.blogspot.com.