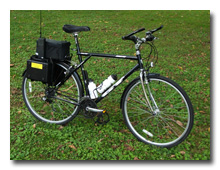 Eric bicycled from his home to West State Street Park for the event, a hilly ride of 7.5 miles. This year, Eric carried his new KX1 Mini Travel Kit on the bicycle instead of the much larger and heavier K2 station he had carried in previous years. In addition to the KX1 Mini Travel Kit, Eric carried his 44' doublet, a clipboard, and an Icom IC-2AT VHF FM handheld. The smaller station traveled very well on the bicycle, much better than the heavier station Eric used in 2010 and 2011 did.

Eric was hoping to be joined by other Athens-area RATs but none were able to participate this year.

Arriving at the park about 12:45am, Eric quickly erected the 28' end-fed wire antenna and set up the KX1 station in the park's picnic-shelter (photo). He had hoped to erect the 44' doublet in addition to the simpler 28' end-fed wire but decided against doing so when it became clear that no other RATs would be available to help. (It turned out to be a wise decision--Eric had to abandon the picnic shelter about 2:45pm when a group arrived to celebrate a birthday party.)

Operations began with the first QSO at 1710 UTC with N1EU in New York on 20 meters. A total of twelve QSOs were made on the 20 meter band and one QSO was made on the 40 meter band before Eric ended operations at 1945 UTC. Stations were worked in CA, FL, ID, IL, ME, MI, NC, NH, NM, NY, OR, and WI. The 20 meter band was troubled with fast, deep QSB and Eric found that strong signals would fade away to nearly nothing before the end of a short QSO.

Eric powered the KX1 with a battery-pack made of ten AA NiMH cells that provided about 13vdc. This pack worked very well and with it the KX1 generated an indicated 2.6W on 20m and 4w on 40m.

The chosen operating location at West State Street Park picnic shelter worked very well. However, as indicated above, Eric had to abandon the picnic shelter for a 3 o'clock birthday party; he moved about 100 yards along the Hockhocking Adena Bikeway to a dirty open-air picnic table that was still surrounded by derecho dead-fall. Eric was able to quickly re-deploy the station, a testament to the ease of deployment of the 28' end-fed wire antenna.

This was Eric's first real operation with the Elecraft KX1 transceiver and he had gone into the event with very high hopes. While he was very pleased with the station's small size, light weight, and ease of transport, he was less pleased with the performance of the transceiver itself. Eric had a great deal of difficulty tuning received stations to zero-beat. He found that he had to run both the RF and AF Gain controls fully open to hear the signals on 20m. He also found that there was a high level of audio hiss with the AF Gain control fully clockwise; turning it down very slightly dramatically reduced the audio hiss. In addition, Eric found the user-interface to be a bit frustrating. (It is quite possible that Eric has been spoiled by several years using his Elecraft K2 transceiver at home and in the field.)

Mike had been trying to decide between several locations for his Bumblebee effort but circumstances conspired to keep him at home for the event. Mike set up his Elecraft K2 on his back deck, used an 88' doublet suspended as an inverted-vee, and keyed with a vintage J-38 hand-key. Mike had only a short time to operate and worked two stations, in FL and ID, on 20 meters.