Two members of the Southeast Ohio Radio Adventure Team and a guest-op participated in the 2011 Adventure Radio Society Flight of the Bumblebees operating event. Eric McFadden, WD8RIF, operated at West State Street Park in Athens, Ohio and was joined by Pete Wickman, KD8MZA. Mike Hansgen, K8RAT, operated at Mt. Gilead State Park near Mt. Gilead, Ohio. Eric operated as Bumblebee #107 and bicycled to his operating location. Mike operated as Bumblebee #222 and hiked to his operating location.

Eric had planned to bicycle from home to West State Street Park for the event, a hilly ride of about seven miles. Unfortunately, the township dumped pea-gravel on one of the major hills the week prior to the event and Eric didn't want to ride a heavily loaded bicycle down or back up a steep hill covered in pea-gravel. Eric chose instead to drive to Nelsonville, Ohio, and bike the Hockhocking-Adena Bikeway to West Street Park, a round-trip ride of twenty-five miles. 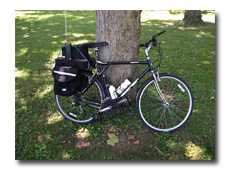 Eric carried his Elecraft K2, LDG Z-11 tuner, K8RA P2jr paddle, Speed-X straight key, and balun in a re-purposed laptop carrying case (photos: 1 | 2) strapped horizontally to his bicycle's rear-rack. Everything else including two antennas, a 5Ah gel-cell, and a 5-watt solar panel, were carried in panniers hanging on the bicycle's rear rack (photo). With all this mass, the rear of the bicycle was heavy and bicycle handling was very different than Eric was used to but the rides to the park and then back to Nelsonville were without incident. Pete drove to the park and met Eric there.

At the park, Eric and Pete set up Eric's K2 station in the park's picnic-shelter. Station power was provided by a 5Ah gel-cell and Eric's small 5-watt solar panel. Eric did all the operating. Pete helped set up the station, hang antennas, and log.

One of Eric's goals for this event was to compare the performance of the W3EDP antenna to that of the 88' Broadside Doublet antenna. Eric and Pete started by trying to hang the W3EDP from a handy tree. Against all expectation, Eric's first throw of the half-filled water-bottle went nicely over the chosen tree branch. Unfortunately, the W3EDP's button end-insulator snagged on a twig and the light string broke. It took the better part of forty minutes, many throws of the water-bottle, and selection of a different tree, to successfully throw the light string over a good branch and hang the W3EDP antenna. Eric used plexiglass spacers and electrical tape to configure the W3EDP's 17' wire as half of a parallel feedline and he ran the antenna as a sloping inverted-L running up from the balun to the picnic shelter roof and then to the tree branch up about 40'.

It took so long to hang the W3EDP and his arm was tired from all the water-bottle throws so Eric decided to operate some before trying to hanging the 88' Broadside Doublet. About 1900 UTC, the 88' doublet was successfully suspended as a flat-top between two trees with an east-west broadside-orientation. Unfortunately, because of the difficulty earlier encountered in hanging the W3EDP, Eric accepted the first throw through each of the two trees and, as a result, the doublet was hung about 25' above the ground, too low for best performance.

Operations began with the first QSO at 1750 UTC with a 20m QSO with N4BP in Texas. A total of fourteen QSOs were made on the 20 meter band before operation ended at 2045 UTC. No QSOs were made on 40m. Some Bumblebee stations were heard on 40m but the band was very noisy and all the stations Eric called faded away before a QSO could be completed. Stations were worked in AR, CO, CT, MA, ME, MN, NH, NJ, NY, OR, SD, and TX. Both 20m and 40m appeared to die about 1900 UTC local time, just about the time the 88' Broadside Doublet was successfully hung. The 10m and 15m bands were not checked for activity.

As indicated above, Eric had wanted to compare the performance of the two antennas. Of the fourteen QSOs made, ten were made with the W3EDP and the remaining four were made with the 88' Broadband Doublet. Very little difference was heard in received signal strengths when one antenna was swapped for the other. The comparisons, however, are not meaningful because the 88' doublet was too low to the ground for best performance and the bands had died by the time the doublet was hung. The W3EDP with the 17' section configured as half of a parallel-feed tuned nicely on both 20m and 40m. The 88' doublet also tuned nicely on 20m and 40m.

The chosen operating location at West State Street Park worked very well and, unlike during last year's event, there were no other users of the park or the picnic shelter.

Mike had intended to park at one end of Mt. Gilead State Park and hike with his station to the other end. When he arrived at the park, he drove past both ends to determine which offered the best possibilities but found that both locations were crowded with other activities including an equestrian picnic at the site he had expected to be less utilized. Mike chose to operate at the site without horses and because of the time lost trying to choose a location, Mike hiked a shorter distance than originally intended but did carry his relatively heavy station in a back-pack and a duffle.

Mike successfully hung his version of the 88' Broadside Doublet as a flat-top between two trees but, because of the time lost in selecting a site, accepted an antenna height of about 30', lower than he had originally intended, and too low for the 88' doublet to generate the best radiation pattern.