One member of the Southeast Ohio Radio Adventure Team and a guest-op traveled to West State Street Park in Athens, Ohio, for the Adventure Radio Society's 2010 Flight of the Bumblebees. Participants were Eric McFadden, WD8RIF, and Greg Broadhurst, KC8JWY. 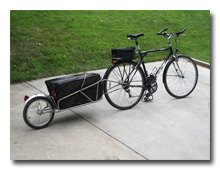 Both ops bicycled from their homes to the park. Eric bicycled from his home south of Athens with his K2 Travel Kit in a borrowed B-O-B "Yak" trailer behind his bicycle. Eric's K2 Travel Kit was repackaged in a plastic storage box purchased specifically because it fit in the Yak well. The radio equipment was protected against vibration with foam padding and survived the trip to the park and home again without damage. Eric arrived at the park just after 2pm to find Greg already there.

At the park, Eric and Greg successully threw a line over a branch about 50' above the ground using a half-filled water-bottle and the line was used to pulled up Eric's W3EDP antenna. Eric and Greg set up the station in the shelter house. Station power was provided by a 5Ah gel-cell and Eric's small 5-watt solar panel.

Eric had registered as a Bumblebee prior to the event and was assigned the number 85. Greg holds a Novice license and didn't operate but helped log and copy.

The chosen operating location at West State Street Park worked very well. The picnic shelter provided respite from the sun and numerous trees were available to support antenna. The only issue with the location was that the operation had to end about half-an-hour prior to the end of the event when a group who had reserved the shelter for a cook-out arrived.