Two members of the Southeast Ohio Radio Adventure Team traveled to Mount Gilead State Park near Mount Gilead, Ohio, for a few hours of play during the first day of the 2012 QRP ARCI Fall QSO Party. Participants were Mike Hansgen, K8RAT, and Eric McFadden, WD8RIF. They were accompanied by Eric's son, Miles, KD8KNC. 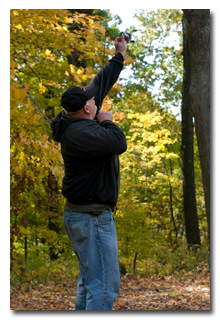 After choosing an unoccupied picnic shelter as the operating location, the trio quickly hung Eric's 44' doublet and W3EDP wire antennas from well-placed trees.

The rest of the station consisted of Eric's Elecraft K2 with recently-installed KAT2 internal autotuner, homebrew 4:1 balun; a Whiterook MK-22 Pocket MIni CW Key was used to key the transceiver. Eric's Elecraft KX1 was set up but no QSOs were attemped with this rig.

One of Eric's primary goals for this outing was to verify the ability of the K2's KAT2 internal autotuner to match his 44' doublet and W3EDP antennas in field conditions. Eric found that the KAT2 easily matched the 44' doublet with 60' of 72Ω twinlead on all bands from 10m and 80m, inclusive. The KAT2 matched the W3EDP on all bands from 10m to 80m, inclusive, but on 40m the KAT2's "ALT" mode was required in order for it to find a nice match; the 17' counterpoise wire was used on all the bands and was deployed on the ground below the main radiator. Both the 44' doublet and the W3EDP antennas were fed through Eric's homebrew 4:1 balun.

Eric also found that the KAT2 could match the W3EDP on 20m and 40m without the 4:1 balun and he used the KAT2's two antenna sockets to perform quick A:B comparisons between the two antennas. On 40m, for the signals listened to, the W3EDP provided significantly stronger reception than the 44' doublet did; this may have been due to the 44' doublet being oriented east-to-west, providing some north-south directivity. On 20m, for the signals listened to, neither antenna appeared to be a stronger performer.

On tear-down, the small-gauge-wire 44' doublet was damaged. Eric plans to rebuild this field-antenna soon with more robust materials.